Museum diner car back to its original color 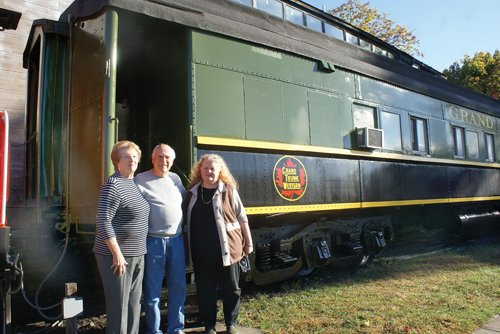 Conners, whose business is based in Pennsylvania, was back in town again last month, this time to visually enhance the outward appearance of the museum’s 1890’s vintage diner car.

In mid-October Imlay City historians Carla Jepsen, Marilyn Swihart and Larry Flegal were able to get a first-hand look at the finished product.

As with the old caboose, Conners was able to bring the old diner car back to its former luster, Swihart said.

“It looks very striking now,” Swihart opined. “Our old diner car has also been restored back to its original colors.

“Jeff does such a great job and we’re always very pleased with his work,” she added.

Swihart noted that the Imlay City Historical Commission purchased both the caboose and dining car from Grand Trunk in 1979, at a total combined cost of about $2,000.

At the time, the cost included the
necessary materials
and placement of both cars on the tracks adjacent to the old train depot, which now serves as the museum.

Purchased for $416, the 86-foot-long dining car was first used by Grand Trunk Western Railroad as a bunk car for the crew.

The ownership of the dining car was transferred over to Imlay City in 2002, after which See’s Siding & Roofing re-roofed the existing roof.

Other physical upgrades occurred in 2004, when Coulter Painting painted the railcar’s exterior; and in 2018-2019, when JEM Electric installed underground electrical conduit and new ceiling lighting in the dining car.

Swihart added that further research revealed that the dining car was originally wood-sided, and later skinned to its present metal state.

Jeff Conners has been in the business of painting railroad cars, carnival rides and military vehicles and equipment for more than 30 years.

Conners travels from town to town in an old ambulance, in which he eats, sleeps and enjoys all the comforts of home.

And once he’s done, he’s off to yet another destination and another restoration project.