IMLAY CITY — In honor of Veterans Day, Imlay City Schools has added additional alumni names to their Wall of Honor.

The four panels, on display year-round in the high school hallway, list former students of the district who’ve served in the armed forces. 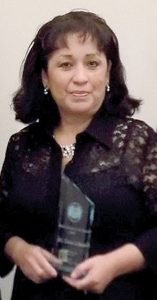 Teresa Moya Gilbert, who served in the Army Reserves, was named Public Servant of the Year in 2016 by the U.S. Office of Special Counsel.

According to notes provided to the district, McCorry served on the USS Nereus, a submarine tender.

Additionally, it’s noted that Pulaskey was a medic in the Korean War.

Moya Gilbert received the 2016 Public Servant of the Year award from the U.S. Office of Special Counsel (OSC). She has been recognized for bringing to light serious violations at the Womack Army Medical Center in Fort Bragg, North Carolina, where she worked as a civilian infection control analyst.
Gilbert began her career in the medical field as a lab technician with the Army Reserves.

She passed in February of this year at the age of 56.

The Wall of Honor was originally created by 2015 grad Mitchell Jones and then refurbished in 2018 with help from The Print Shop. John Gonzales, a 1967 graduate and U.S. Army veteran, donated funds for the project.

Thanks to the use of handcut vinyl letters on the new panels, names can be more easily added or amended.

The panels feature insignia of each branch of the military and notes Gold Star designations for those who died in service.

The Wall of Honor is on permanent display in the school’s main hallway above class composite pictures.

The school district and Imlay City Schools Alumni Association work together to collect names and update the board. Since the board were created both entities have sorted through their historical records to find those names of alumni service members and the district attempts to track recent graduates who enlist in the armed forces.

Anyone from the community who would like to submit a name for the Wall of Honor can contact Imlay City School’s Central Office, the High School Office or the Alumni Association.