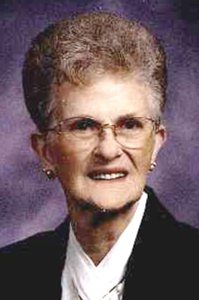 Marian Pearl Sidell went home to be with her Lord November 1, 2020 at the age of 94. She was born March 6, 1926 in Holland, MI to Egbert “Ed” and Gertrude (VandenBosch) Bloemsma, moving to Imlay City at the age of six years.

Marian married Edward H. Sidell on January 14, 1947. He passed away June 22, 1977. She was a homemaker, and also worked at the D&C store for some years. God gave Marian a ministry of sending cards and letters; she was a member of the Imlay City Christian Reformed Church.

Due to recent health concerns of the COVID-19 pandemic, social distancing (six feet apart), masks (to be worn at all times), and limited occupation (20 people at a time) of the funeral home will be enforced.

The family would like to thank Earl and Wynette and all the caregivers employed at Heatherton Place for their love, care and prayers during her stay. God bless them all.

Please be sure to sign the online register at muirbrothersfh.com to share condolences and memories with the Sidell family.