IMLAY CITY — Last month the school board awarded dozens of bids to contractors for the construction of new classrooms and a performing arts center.

At their October 26 meeting, board members approved bids totalling $15.1 million, nearly $300,000 less than the $15.4 million budgeted for the projects. The new construction is being funded with $36.8 million in bond funding approved by voters in 2019.

Among the list of bidders were two local contractors. Fuerst Plumbing of Imlay City was selected to complete mechanical work at both sites for a total of $1.95 million. T.G. Priehs, also of Imlay City, secured a $1.06 million bid for paving. 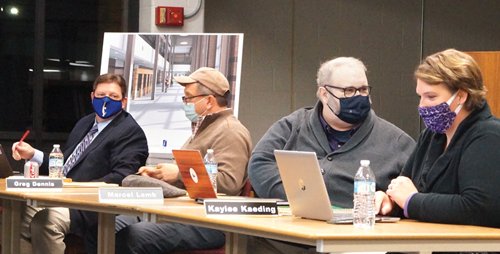 They both amount to some of the highest bids awarded that night. Topping the list in terms of value was the $2.6 million bid for masonry work awarded to Arisco Contracting Group of Fraser, MI. All the bidders, except for one, were Michigan-based. Beck Studios, an Ohio company, was selected to supply theater/stage equipment for the project.

Barton Malow’s Daryl Dombrow said they planned to meet with the successful bidders in the near future and work was still on track to begin sometime in November. Plans for ground breaking ceremonies are also in the works.

Artist renderings of the performing arts center were on display at the board meeting.

At Weston Elementary, a new wing with six classrooms will be built to accommodate early childhood programming. The addition will be made onto the northwest corner of the school building.

At the high school, a 500-seat performing arts center will be added on to the south end of the building. School officials have said the new addition will be utilized for student instruction, performances and community use.

Teachers and students will be able to occupy the classrooms by August 2021 while the high school’s addition won’t be ready until August 2022.

Contractors began work on smaller bond projects earlier this year. Parking lots and playground surfaces were repaved, new buses were purchased, video surveillance systems were installed along with improved fire alarms and interior
and exterior lighting
and more secure entrances were created at Borland and the Middle School.

The district has used more than $200,000 in bond funds to purchase Chromebooks in their quest to have one device for every student.

In November, the board will award bids as part of the bond’s fourth package. That work will encompass new secure entrances at Weston and the high school; flooring and locker replacements, media center renovations, new exterior doors and windows and classroom technology. All of that work should be complete by August of next year.