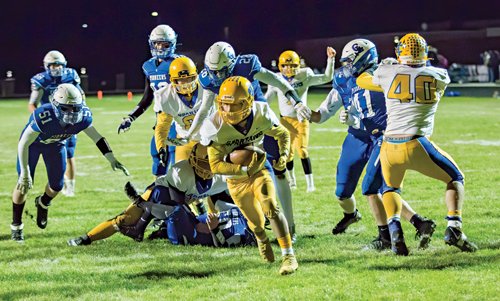 IMLAY CITY — The Imlay City football team put up a good fight, only to drop a 40-26 verdict to host Cros-Lex in a Division 4 opening round playoff matchup last Friday night.

With the decision, Cros-Lex (6-1) moves on to this Friday’s district semifinal clash at North Branch (7-0). That battle begins at 7 p.m. Imlay City sees a 4-3 campaign conclude.

“I am proud of the way this team battled through the adversity not just this week, but through the entire season,” Imlay City Coach Brian Tresnak said. “Not many people outside of the team gave us much of a chance,” he noted.

“We fought through the very end and left everything on the field Friday night. Thank you to my staff and my seniors for really stepping up this week and leading the team.”

In Friday’s matchup, Cros-Lex spotted Imlay City a 14-12 advantage after one quarter was done.

The middle two quarters saw Cros-Lex amass 22 points and Imlay City generate 12, leaving the hosts with a 34-26 lead to protect.

Imlay City generated their 26-point total thanks to a touchdown each by Cristian Rojas, Julian Rojas, Jack Kaplan and Dakota Sandzik plus a pair of accurate extra point kicks courtesy of Luther.

For the night, Kaplan completed three of 12 pass plays for 72 yards as Imlay City’s quarterback. He threw one interception along the way.

His accurate tosses went to two different players. Cristian Rojas (two catches for 45 yards) and Sandzik (one reception for 27 yards) formed that group.