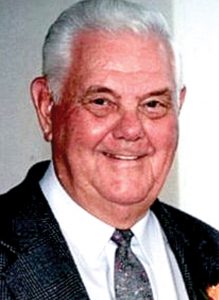 Charles Jay Leonard was born to Helen Francis Arledge and Paul Thomas Leonard on October 15, 1925 in Piedmont, MO. He went home to loving, peaceful, eternal arms of the Lord on October 29, 2020 in Pueblo, CO, days after celebrating his 95th birthday.

When he was two years old the family moved to Michigan. He graduated from Capac High School in 1942. At Michigan State University he met Doris Gage Nichols. They were married September 10, 1949 in Delmar, NY– the beginning of 71 years of marriage. He was a proud Army Aircorp veteran preparing to serve in WWII, but the war ended.

Chuck had an illustrious and rewarding career as a stockbroker from 1957– the year they moved to Pueblo from Chicago– until he retired in 1988.

Retirement meant spending summers throughout the years at their beloved Silver Lakes cabin near Monte Vista, CO. So many fond memories with family and friends. They also enjoyed their many special church friends as well as their Saturday night dinner gang. Chuck and Doe experienced many sights and activities during their trips in the USA, and in other countries. Chuck and a friend, Roger, had a small business together, renovating old houses for a number of years.

Surviving brothers are Lee (Helen) Leonard of Texas and Jim (Eileen) Leonard of Alabama. He is also survived by his daughter, Norma (Randy) Lesher. He was blessed with two grandchildren: grandson, Jason (Neve) and great-grandchildren, Rowan, Hazel, and Kelton; and his granddaughter, Mandi (Mike); as well as numerous nieces and nephews. He will be missed.

A memorial service is planned to be announced at a later date.