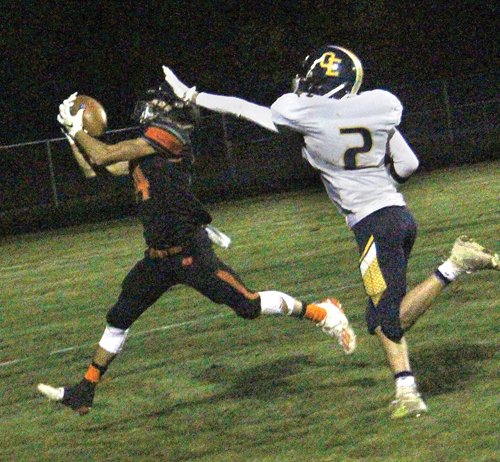 Charlie Koenig, of Almont, hauls in a touchdown reception Friday against Ovid-Elsie.

With the outcome, Almont (3-2) advances to this Friday’s district semifinal clash where Frankenmuth (7-0) provides the opposition. That matchup lists a 7 p.m. starting time. Ovid-Elsie finishes at 3-4.

“We had a pretty good week of practice and that showed in the first half,” Almont Coach James Leusby said. “We executed very well early in this game and that gave us a lot of confidence moving forward,” he noted.

“We will get back to work on Monday to get prepared for a very good Frankenmuth team.”

In Friday’s encounter, Almont bolted out to a 14-0 advantage after one quarter was over with.

The second quarter saw Almont collect seven points and Ovid-Elsie manage none, leaving the former up by a 21-0 count at the half.

When the action resumed, Almont struck with a 7-0 third quarter advantage. That increased their cushion to 28-0.

For the night, Conger connected on five of seven pass plays for 77 yards as Almont’s quarterback. He threw zero interceptions along the way.

His successful tosses were distributed to three different targets. Their ranks consisted of Koenig (three catches for 47 yards), Scott Pape (one reception for 17 yards) and Noah Houvener (one catch for 13 yards).

The Almont ground attack chewed up 219 yards of territory on 36 totes.