TRI-CITY AREA — General election day 2020 is nearly here. In less than one week, voters across the area will cast in person and absentee ballots before the 8 p.m. deadline on Tuesday, Nov. 3. 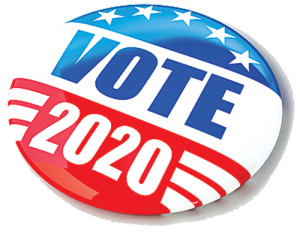 In most precincts, voters have a sizable list of races and proposals to weigh in on.

Across the state and locally, municipalities are preparing for high voter turnout, fueled in part by strong demand for absentee ballots.

That factor, plus others, could impact when election results are available but Lapeer County Chief Deputy County Clerk Amy Stearns is optimistic the delays won’t be significant.

“I do believe that we will have unofficial results available on Wednesday, November 4,” Stearns said.

Here’s a recap of what will appear on local ballots.

In Almont, five candidates will appear on the ballot in their quest to secure one of three open seats on the Almont School Board. The field includes one incumbent, Jill Bowman-O’Neil, plus Justin Burns, Angela Edwards, James Wade Jr. and Charlton Zimmerman.

There’s a crowded field of residents hoping to serve on the Imlay City School Board as well. Three seats are up for grabs. Looking to retain their spots on the board are Kaylee Kaeding, Dr. Marcel Lamb and Dr. Laura Zelenak. Challengers are Alex Lengemann, Bill Lengemann, Matt Parsch and Carm Ross.

In the village of Almont, six candidates have filed to fill five open seats on the council.

In the village of Dryden, Council President Elizabeth Thiemkey is looking to retain her position at the head of the board. Challenging her for the job is Alen Graham.

Within the county’s court system, Lapeer Circuit Judge Byron Konschuh hopes to keep his seat on the bench. Challenging him for the job in the non-partisan contest is Mike Hodges.

Voters will also decide who gets to represent Lapeer County in the House of Representatives. They’ll choose between incumbent Gary Howell, a Republican, and Jerry Tkach, a Democrat.

The November 3 ballot features three countywide measures and a handful of others at the local level.

•Almont Township Fire Department millage renewal: The proposed renewal will keep the levy amount unchanged at one mill and extend it’s life for a period of five years, from 2021 through 2025. Per the ballot language the funds will be used to purchase “fire extinguishing apparatus and equipment and housing for the same.”

•Goodland Township Library millage renewal: The request seeks to renew the existing .8777 mills for a period of six years, from 2021 to 2026. These funds allow the township library to operate and service the community.

If approved, the millage renewal would generate approximately $59,500 in the 2021 calendar year.

•Imlay City Street and Sidewalk millage renewal: Residents will be asked to approve a six-year renewal of its exiting 2.46-mill levy to continue funding street improvements. If approved, the renewal would raise an estimated $258,000 in the first year of the levy, which would run through 2026.

•Lapeer Animal Control Millage: Residents are being asked to support a 0.20-mill levy for five years to fund Lapeer County Animal Control. If approved the millage would raise $635,000 for operational funds and the care of animals housed at the county shelter.

•911 Surcharge Increase: Lapeer County Central Dispatch is asking to increase the current 911 surcharge rate by 74 cents—from $1.55 to $2.29 per month.

The funds cover the agency’s operating costs and the increase is necessary, it’s board says, to keep it viable.

•Lapeer County Veteran Affairs millage increase: The Veterans Affairs Office is seeking an additional 0.085-mill through 2023, to assist the county’s approximately 5,700 veterans. If approved, the total amount raised for veterans programs would be about $565,000 in 2021.

District Judge Mona Armstrong, who was appointed to the bench earlier this year, is looking to earn a full, six-year term. Her challenger in the non-partisan race is Caryn VanderHeuvel.

In the county’s
81st District for the Michigan House of Representatives, incumbent Gary Eisen, a Republican, hopes to earn another two-year term. His challenger is Democrat Debbie Bourgois.

There’s a three-way race for two seats on the Capac School Board. The field includes John Antilla, Bill Ellis and Beverly Wheelihan. Ellis is an incumbent.

In the Tri-City area there are just three funding requests on local ballots.

•Capac Streets renewal: The two mill levy was first approved by voters in August 2014. This request is
for a four-year term.

The millage funds will be used for the “improvement, construction and/or repair of roads, highways, streets and/or bridges” from 2022 to 2026.

•Berlin Township Fire request: Voters
are being asked to consider a 10-year 1.5-mill special assessment increase to purchase new fire equipment and apparatus to conclude
in 2030. The millage’s passage would raise an extra $184,000 per year and bring the total
millage for fire services to 3.5 mills from the current level of 2.0 mills.

Democrat Kimberly Bizon and Republican Lisa McClain are vying for the soon-to-be open seat in Congress. Whoever gets the most votes will represent Lapeer and St. Clair counties in Michigan’s 10th District for a two-year term.