Dozens show up at Almont Park for DTE tree planting

ALMONT — On Friday night, organizers of a tree planting project at Almont Community Park were still unsure how many volunteers would show up early on Saturday, Oct. 24, to help out.

But by 9 a.m. it was apparent to Park Board Vice Chair Shelley Sadler and Almont Township Treasurer Roberta Kudsin that the community’s spirit of giving back was alive and well. 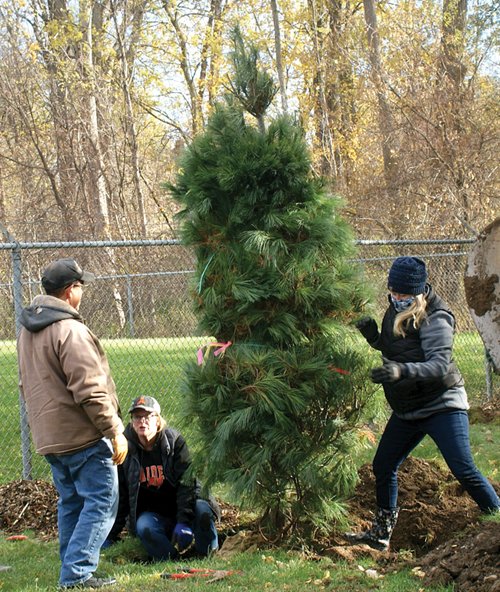 Volunteers position an evergreen along the northern section of Almont Community Park during ReLeaf Michigan’s planting.

The free DTE Tree Planting Event to plant 15 trees at the park, ranging in height from 5-12 feet, was sponsored by ReLeaf Michigan, who was represented by Kate Tuttle.

Kudsin estimated the turnout at somewhere between 50-75 people, many of whom came armed with rakes and shovels.

She extended special praise to Almont’s DPW staff and Supt. Bryan Treat for their extraordinary efforts on behalf of the project, which included pre-digging the holes for the trees.

“Coach posted this in the locker room and we decided we wanted to help,” Bryce Ferman said. “This community has always supported us and we want to do the same for the community.

“Our coach tells us that when we do good things, that good things will be returned, and that’s what we believe.”

The project was particularly meaningful for some in the large entourage of volunteers.

In one of the groups was 5-year-old Audrey Abke, who helped plant a tree in memory of her mother, Stacy, who passed away in March.

‘Thank you to e
everyone who came through for our community,” Kudsin said. “Several community businesses and organizations donated to the event.”

Among them were the Almont Lions Club, Vinckier Foods of Almont, Family Farm & Home and Blake’s Cider Mill.

“All of us involved in this project want to thank everyone who participated,” Kudsin added. “It gave all of us a great sense of community cooperation.”