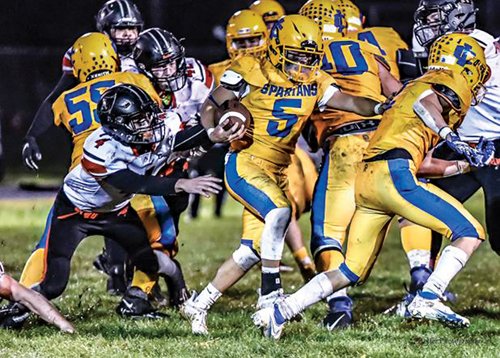 It marked the first time since the 2008 campaign Imlay City has defeated Almont.

“This was a huge win for us,” Imlay City Coach Brian Tresnak said. “We played much better football tonight with no turnovers and really cut down on our penalties,” he noted.

“I am proud of how far this group of young men have come. It’s a testament to their character that they were able to rebound after last week.”

“All credit goes to Imlay City tonight,” Leusby acknowledged. “They earned one and we wish them well in the playoffs,” he noted.

“We will see who we line up with in the playoffs and get to work on Monday. We need to get healthy and have a great week of practice if we want to extend our season.”

With the decision, Imlay City concludes a 4-2 regular season run. All of those results have come versus BWAC foes. Almont finishes the regular season portion of their schedule at 2-2 overall and against league counterparts.

In Friday game, Imlay City jumped out to a 21-0 advantage after one quarter was over with.

Quarter two would see Almont bounce back with a 14-0 edge, closing the gap to 21-14 at the halftime break.

Imlay City then outscored Almont 7-0 the rest of the way, finishing off a 28-14 win.

On the night, Jack Kaplan completed two of pass plays for 75 yards as Imlay City’s quarterback. He threw zero interceptions along the way.

His successful tosses went to Sandzik.

The Imlay City ground attack wound up with 227 yards on 35 totes.

For Almont, Brock Conger connected on six of 10 tosses for 102 yards as their quarterback. He threw no interceptions en route to those numbers.

The Almont ground attack finished with 90 yards on 37 carries.

Imlay City returns to action this Friday when it faces Cros-Lex (5-1) in the opening round of the Division 4 state playoffs. The road matchup lists a 7 p.m. starting time.

Almont, meanwhile, will aim to bounce back when they begin their Division 5 playoff run with a home game Friday against Ovid-Elsie (3-3). That battle is slated to get underway at 7 p.m.