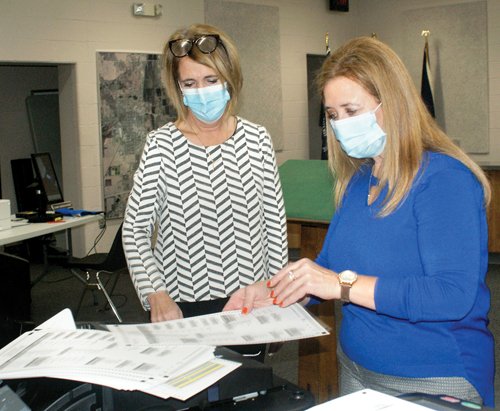 IMLAY CITY — The accuracy of Tuesday’s (Nov. 3) voting process will be of the highest priority to Imlay City Clerk/Treasurer Dawn Sawicki-Franz, her fellow staff and election volunteers at the Imlay City Hall.

On Monday, Oct. 26, voting machines arrived at the hall and an expert was on hand to test out the equipment to ensure it operates accurately and effectively on election day.

Steve DeLongchamp of Grand Rapids-based ElectionSource said his job is to conduct preliminary tests designed to assure that voting machines’ terminals and tabulators are working properly and that they meet all conditions required by the State of Michigan.

DeLongchamp said he services about 300 jurisdictions throughout Michigan, including the majority of Lapeer County election sites.

The accuracy of this year’s voting has been called into question by some and Sawicki-Franz wants Imlay City residents to know their votes will be counted.

She pointed out that continuing coronavirus concerns and a highly motivated public have resulted in unprecedented numbers of votes being cast prior to the Nov. 3 election.

“About 71% of our absentee ballots have been turned in already,” Sawicki-Franz said, adding there has been a marked increase in first-time voters.

“We’re getting a lot of people who have never registered to vote before,” she said. “I see people of all ages coming in, young and older.

“In one week, we had 50 people register that had never voted before.”