DRYDEN TWP. — Unlike previous years, local firefighters have been unable to visit school children and/or host traditional Fire Safety activities and open houses in the month of October.

Instead, Dryden Township firefighters conjured up an alternative method to get out their fire safety messages to residents. 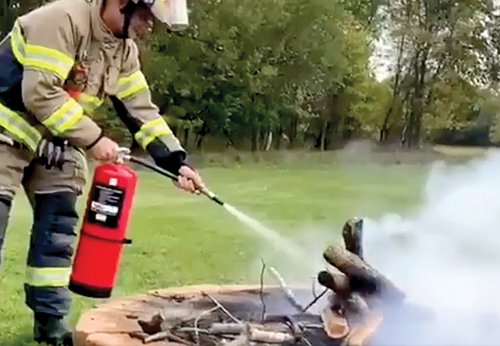 Dryden Fire Lt. Darrell Schultz demonstrates how to properly use a fire extinguisher in the department’s recently published videos.

“We typically host an open house at the fire hall on the first Saturday in October,” Napolitano said. “Because of COVID, we were not able to do that again this year.”

Which led to the novel idea of a handful of firefighters and medical first responders recording videotaped fire safety tips and posting them on the fire department’s Facebook page.

Napolitano said the outreach project has allowed the fire department to personally deliver their fire safety and fire prevention messages to residents.

“We did not want to miss out on the opportunity to connect with kids and families,” he said. “Like everyone, we’ve had to adjust our protocol for getting our message out to the public.

“Fire prevention is always at the heart of what we do,” he continued. “Anything we can do to prevent fires and to save lives is of the highest priority.”

Napolitano was assisted with the videotaping by his 13-year-old son, Liam, who also edited the tapes.

In addition to Napolitano, whose message focused on families having an escape plan in the event of a fire, five other DFD members offered fire safety tips via Facebook.

They included: (1) Fire Lt. Darrell Schultz, who spoke about how to properly use a fire extinguisher; (2) Amy Barger, who discussed the importance of smoke detectors in the home and checking their batteries at least twice a year; (3) Firefighter Ralph Starke, who offered tips on keeping homes safe from fires; (4) Firefighter Greg Thorman, who talked about the Lapeer County Smoke Trailer; and (5) Firefighter Rod Redwood, who alerted residents of the threat of kitchen fires, whose frequency was noted.

Napolitano said the video messages have been well-received by community members, many of whom have responded with supportive comments.

“We’ve gotten a lot of positive feedback from the community since we began doing this,” he said. “They’re being shared by a lot of people and we’ve gotten well over 1,000 views so far. It’s what we hoped to see.”

He said there was an additional benefit from the videos, in that residents, particularly children, were able to see some of the people they might see in an actual fire or emergency.

“This has been a way for the community to see and recognize some of the people who will respond when they call 911.”