LAPEER COUNTY — Three funding requests will appear on all Lapeer County general election ballots. Among them is a proposal from Lapeer County Central Dispatch to increase the current 911 surcharge rate.

For the last 12 years the surcharge rate on resident’s phone bills has remain unchanged at $1.55. The ballot request seeks to raise that amount by 74 cents to stand at $2.29 per month—a move it’s authority board says is necessary to ensure the agency remains viable.

“The surcharge is our agency’s only source of funding. It’s applied to any device that can call 911,” said Jeffrey Satkowski, Executive Director of Lapeer County Central Dispatch. 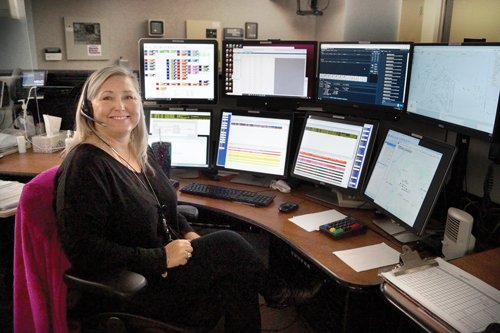 Supervisor Candy Anderson sits in front of a panel of screens that help her coordinate responses among multiple Lapeer County agencies.

With additional surcharge revenues, Central Dispatch would add staff to their roster—including a supervisor and dispatcher—and be able to cover vendor and service contract increases.

“This is a broad but efficient operation,” Satkowski noted.

On a recent evening, a trio of three dispatchers fielded calls from across the county for everything from fireworks complaints and erratic drivers to a road rage-related assault and multiple medical calls.

Shift Supervisor Candy Anderson, who’s worked at Central Dispatch since it was created 23 years ago, believes Lapeer County is fortunate to have a true Central Dispatch.

“All the information first responders are getting comes from us—from one hub. That makes for a very efficient system and one I think that residents will find is worth the extra 74 cents,” Anderson said.

In other regions of Michigan, 911 calls are directed to individual agencies and, as a result, it can be difficult for those agencies to coordinate their efforts.

An array of technology helps Lapeer County dispatchers swiftly respond to emergency calls. Anderson sat in front of a panel of eight individual computer screens from where she could access LEIN records; mapping technology that shows the location of 911 callers and first responder vehicles; a huge database of agency and on-call phone numbers; the Text to 911 interface and much more.

“Nothing is the same since day one but the actual radio system has changed the least,” Anderson said.

“Obviously we have a lot of tools at our disposal but you’ve got to keep up on all the technology too.”

•Central Dispatch’s annual budget stands at about $1.7 million with the majority of funds—86 percent—generated from phone surcharge revenues. The remainder—14 percent—is state 911 fee distributions. These dollars are used for wages and benefits, training, maintenance, capital improvements and more.

•Last year, county taxpayers completed paying towards Central Dispatch’s 10 year, .75 mill levy that enabled the construction of a new radio and 911 phone system and supporting equipment purchases. Although they are two separate sources of funding, the board wanted to wait until the millage was paid off before asking for a surcharge increase.

•If approved by voters, the new rate won’t likely take effect until late in 2021 and the agency won’t see the new revenue until the fourth quarter.

•It takes a prospective dispatcher eight months to one year to
be fully trained and another one to three years to become proficient in their work. New hires only need to possess a high school diploma and the agency provides all of the required training.