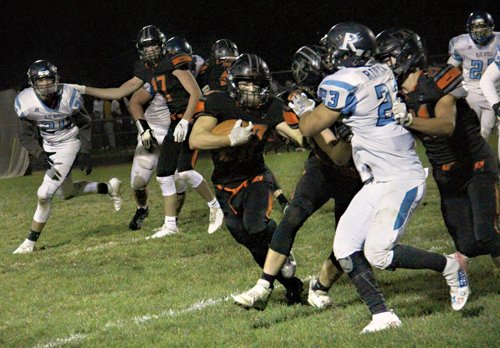 With the decision, Almont raises its mark to 2-1 overall and against BWAC counterparts. Richmond slips to 1-4 this season and versus league foes.

“I am proud of our kids tonight,” Almont Coach James Leusby said. “We didn’t really know what to expect after having two weeks off from football,” he noted.

“They really dug down deep and found a way to get the job done. It wasn’t pretty but we made the plays we needed to. All credit to Richmond for battling back in the second half, but we are glad to be moving forward with a win.”

In Friday’s battle, Almont and Richmond ended the opening quarter with seven points each.

Quarter two saw Almont amass 12 points and Richmond manage none, good for a 19-7 advantage at the half.

When play resumed, Richmond struck with a 7-0 third quarter edge. That trimmed their deficit to 19-14 at the time.

Richmond then followed it up with an 8-3 fourth quarter advantage, making it a 22-22 ballgame at the end of regulation play.

In overtime, Richmond got the ball first. It was there the Blue Devils capitalized with an accurate field goal attempt, taking a 25-22 lead.

Almont then countered with a touchdown, pulling out a 28-25 victory.

For the night, Conger completed three of six pass plays for 54 yards as Almont’s quarterback. He threw zero interceptions en route to those numbers.

His successful tosses went to two different targets. Their ranks consisted of Houvener (two catches for 44 yards) and Lulgjuraj (one reception for 10 yards).

The Almont ground attack chewed up 234 yards of territory on 53 totes.

Almont will look to continue their winning ways this Friday when they travel to Imlay City for a BWAC game. The contest, the regular season finale for both combatants, lists a 7 p.m. starting time.