With the decision, Imlay City improves to 3-1 versus BWAC counterparts and overall. Yale slips to 0-4 this season and against league rivals.

“We got the win, but we have to do a better job of taking care of the ball,” Imlay City Coach Brian Tresnak commented. “We had way too many turnovers and costly penalties tonight,” he noted.

“If we want to compete with the top teams in the league, we have to stop beating ourselves.”

In Friday’s game, Imlay City took a 7-0 edge after one quarter was over with.

When the action resumed, Yale struck with a 6-0 third quarter edge. That trimmed their deficit to 21-13.

The fourth quarter would see Imlay City outscore Yale 7-0, finishing off a 28-13 win.

For the night, Kaplan completed four of seven passes for 53 yards as Imlay City’s quarterback. He threw zero interceptions en route to those numbers.

Luther was the other 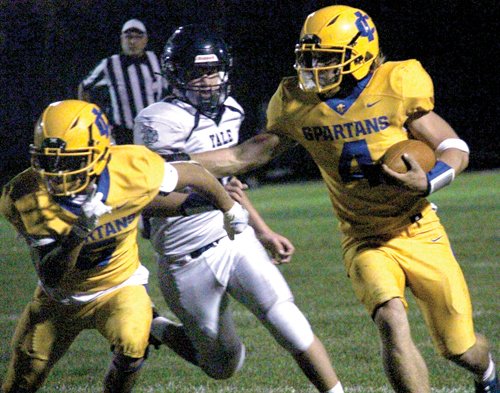 Imlay City player who opted to air out the football. His lone attempt, on a fake punt, went for a 29-yard gain to Sandzik.

The Imlay City ground attack wound up with 225 yards on 39 totes.