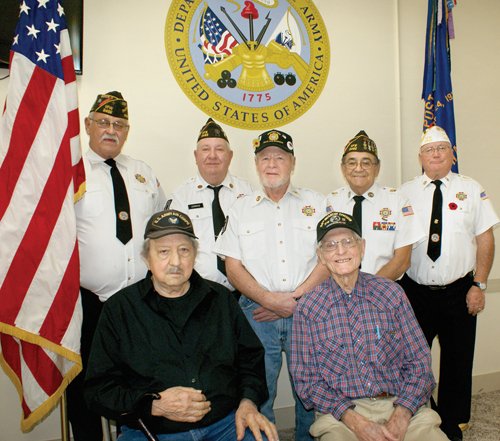 That was the sentiment of Lapeer County’s Veterans Esteem Team members, who on Tuesday (Oct. 6) honored 92-year-old Pvt. Claude Welch of Lapeer, who served as a mechanic with the U.S. Army Air Corps.

The surprise ceremony took place at the Imlay City VFW Post #2492, where members from both organizations gathered to host the presentation and share a meal will all attendees.

At the outset, Post #2492 Commander Bob Conrad introduced Phillip Hunkele, who shared an emotional message about the importance of not forgetting the sacrifices of America’s veterans.

Esteem Team member David Koning followed with the presentation of a plaque and official letter from President Donald Trump, thanking Pvt. Welch for his service to the country.

An unsuspecting and appreciative Welch, who was joined by his wife, Mary, stood to receive the plaque and to thank the Esteem Team and all those in attendance.

Among others, Esteem Team members present for the ceremony were the organization’s co-founder Abigail Koning, brother, Daniel Koning, and their mother, Bonnie Koning.

Since the Lapeer County Veterans Esteem Team was founded by Benjamin and Abigail Koning in 2016, the organization has hosted annual dinner programs at rotating high schools throughout Lapeer County for the purpose of honoring all local veterans.

In conjunction with the ongoing COVID-19 pandemic, Esteem Team members recently collected, packed and delivered food baskets to hundreds of veterans in Lapeer County and the periphery.

On behalf of attending Post #2492 members Phil Hunkele, Harry “Butch” Earehart, Bob Judge and Bronze Star recipient Joe Palazzolo, Post Commander Bob Conrad said he was pleased to share the opportunity to honor veterans Welch and Rabineau for their service to the country.

“It was a high honor for all of us to be part of this,” said Conrad. “And it was a very poignant moment to see both men share a hug.

“Thank you to the Esteem Team for continuing to exhibit the highest principles of patriotism and for making this event possible.”