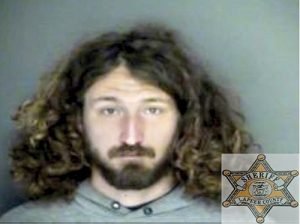 ATTICA — A 24-year-old Elkton man has been arrested and charged with stealing a van from the driveway of a 67-year-old Attica resident Sunday, Oct. 4.

Lapeer County Sheriff’s Det./Sgt. Jason Parks reported that at around 3:20 a.m. on Sunday, Oct. 4, the homeowner was awakened by noises originating from his driveway in the 3200 block of Imlay City Rd.

Upon investigation, he discovered the suspect stealing his 2004 Chevy Venture van, unlocked with keys in the ignition, from the driveway.

He said marked Sheriff’s cruisers activated their emergency lights and sirens and attempted to stop the suspect, whose speed ranged from 80 mph to 100 mph in a 55 mph zone.

“Near the intersection of Cedar Street and Capac Rd. (M-21), Imlay City Police officers were able to successfully deploy spike strips that compromised the stolen vehicle’s tires,” Parks reported. “The vehicle slowly came to a stop and the driver was taken into custody at around 3:35 a.m.”

On Monday, Oct. 5, the Lapeer County Prosecutor’s Office filed charges against Deering for (1) Unlawful Driving Away of a Motor Vehicle and (2) Fleeing a Police Officer-4th degree.

The suspect was subsequently arraigned in the 71-A District Court of Lapeer.

Deering was later released on a $2,500 personal recognizance bond and a court date was set for Oct. 16.