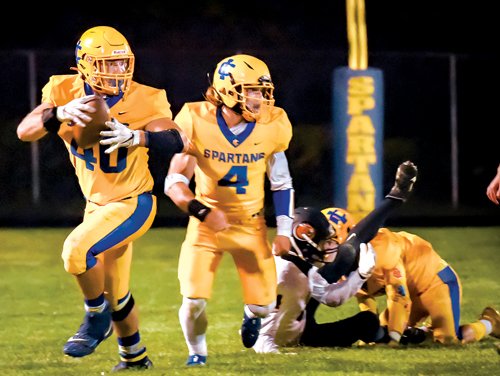 Imlay City’s Chris Cezik heads up the field as Lance Wolford looks on after scooping up a fumble during his team’s BWAC encounter with Armada this past Friday. Photo by StudioE Photography

Cezik impressive on defense, Sandzik and Rojas combine for 200 yards

IMLAY CITY — The Imlay City varsity football team saw to it that they would prevail, pulling out a 15-14 victory over visiting Armada in a Blue Water Area Conference matchup last Friday night.

With the decision, Imlay City moves to 2-1 this season and versus BWAC foes. Armada slips to 2-1 against league counterparts and overall.

“This was a complete game tonight,” Imlay City Coach Brian Tresnak said. “Offense, defense and special teams all came together and played hard,” he noted.

“If we keep putting in the work to get better every week, I think we can compete with anyone.”

In Friday’s matchup, Imlay City and Armada ended the opening quarter with zero points each.

When the action resumed, Imlay City bounced back with a 9-8 third quarter edge. That left Armada holding a 14-9 advantage with 36 minutes elapsed.

Imlay City then outscored Armada 6-0 the rest of the way, leaving with a 15-14 victory to their credit.

The winning Imlay City side generated their 15-point total aided by a safety which saw Wyatt Luther and Chris Cezik combine to tackle an Armada ballcarrier in the endzone; a Julian Rojas 12-yard touchdown run (followed by a successful extra point kick courtesy of Luther); and a Cristian Rojas 43-yard touchdown run.

For the night, Jack Kaplan completed two of four pass plays for 23 yards as Imlay City’s quarterback. He threw two interceptions en route to those numbers.

Dakota Sandzik had both of Imlay City’s catches.

Imlay City will look to continue their winning ways this Friday when they entertain Blue Water Area Conference rival Yale. That clash is slated to get underway at 7 p.m.