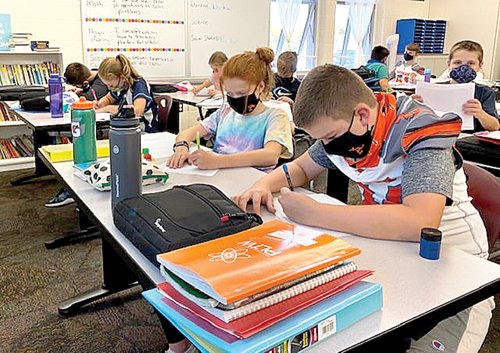 Design and modeling class students at Almont Middle School work on a project in class late last month. Despite a second confirmed COVID case among high school students, the high school is still on track to reopen next Monday.

Almont Supt. reports one new case, but not necessarily related

The newly-confirmed case marks the second Almont student to have tested positive for COVID-19.

“Last night (Oct. 5), I was informed by the Lapeer County Health Department that another AHS student has tested positive,” Kalmar said. “The student shares a class with our other COVID-positive student, but we cannot verify that the transmission occurred there.

“Both students are doing well,” he said,
“and will be able to return to school along with their classmates on October 12.”

On Sept. 27, school officials reported that a lone high school student was diagnosed with the virus, which led to the closure of the school for in-person classes until Monday, Oct. 12.

Despite the new case, school officials are hopeful that no additional cases will be confirmed, and that classes will resume at the high school on Oct. 12.

It was just on Monday (Oct. 5), that Kalmar said there had been no additional positive cases reported, including among the first student’s siblings and family members.

Kalmar reported that both siblings had taken the COVID-19 “rapid test” and tested negative.

“As of Monday, we had no positive cases outside the lone student,” Kalmar said. “The Health Department initially presumed the two siblings were positive based on their symptoms and the chance that the rapid test might have been inaccurate.”

He added that a younger sibling, who attends Orchard Primary School, was not tested.

Presuming there are no additional cases, Kalmar still expects classes to resume at the high school on Monday, Oct. 12.

“We do not anticipate a delay in our return at the high school,” Kalmar said Monday.

Though the Michigan Supreme Court has struck down Michigan Gov. Gretchen Whitmer’s power to take executive action, Kalmar anticipates that mask-wearing will still be required.

With many Almont High School students and staff still quarantining because of their presumed exposure to COVID-19, Kalmar said the district has revised its screening procedures to include absent students.
As of Monday, the district plans to contact parents and guardians of students who are absent for two consecutive days.

He said the purpose of the protocol is to evaluate students’ symptoms for possible exposure to the coronavirus.

“This is neither meant to be intrusive, nor because we doubt parents’ or guardians judgement,” Kalmar said. “COVID-19 is a complex virus and the symptoms can mimic common ailments that students are frequently absent for.

“It is our hope we can guide parents and guardians through these symptoms when making decisions about school attendance,” he continued. “We can also assist families in finding testing facilities if they decide that testing is an appropriate step for their student.”

Kalmar added it is important that parents understand that teachers will be flexible with students who have to miss school.

“These are unprecedented times and our faculty, staff and administration will be working with families on a case-by-case basis,” Kalmar said.