With the outcome, North Branch improves to 2-0 versus league foes and overall. Almont drops to 1-1 this season and against BWAC counterparts. 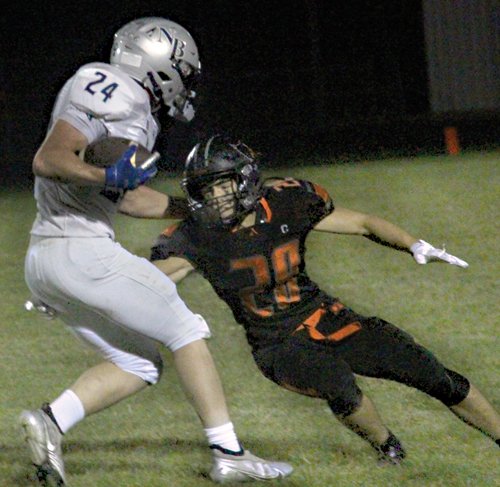 “We ran into a good team tonight,” Almont Coach James Leusby said following the game. “All we can do is learn from this and get back to work on Monday,” he noted.

In Friday’s contest, Almont spotted North Branch a 14-0 advantage after one quarter was done.

Quarter two would see North Branch collect seven points and Almont none giving them a 21-0 cushion at the halftime break.

It was followed by a scoreless third quarter.

North Branch then outscored Almont 7-0 the rest of the way, closing out a 28-0 win.

On the night, Noah Houvener completed two of nine pass plays for seven yards as Almont’s quarterback. He threw no interceptions en route to those numbers.

Charlie Koenig (one for eight yards) Michael Lulgjuraj (one for a one- yard loss) had Almont’s receptions.

Matthews added a pair of interceptions to Almont’s cause.