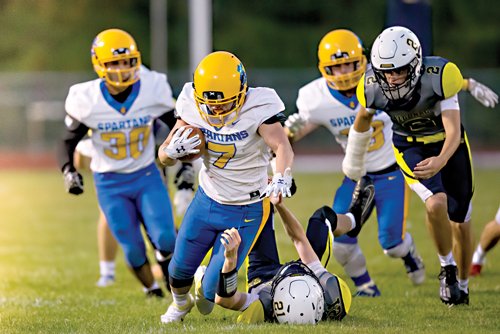 With the outcome, Imlay City improves to 1-1 versus BWAC rivals and overall. Algonac slips to 0-2 this season and as far as league clashes are concerned.

“We put together a full four quarters tonight,” Imlay City Coach Brian Tresnak said. “I’m proud of the team effort in all three phases of the game,” he noted.

“We need to work on making fewer mental mistakes and stop beating ourselves. We are just focusing on getting better each week.”

In Friday’s encounter, Imlay City took a 7-0 edge after one quarter was done.

They then outscored Algonac 6-0 the rest of the way, finishing off a 34-14 triumph.

On the night, Jack Kaplan completed two of seven pass plays for 68 yards as Imlay City’s quarterback. He threw one interception along the way.

His successful tosses went to two different targets. That group consisted of Chris Cezik (one catch for 55 yards) and Sandzik (one reception for 13 yards).

The Imlay City ground attack chewed up 312 yards of territory on 39 totes.

Imlay City returns to action this Friday when it entertains Armada. The clash, between Blue Water Area Conference rivals, is slated to get underway at 7 p.m.