Chief Rick Horton is hoping others are inspired to join

IMLAY CITY — The Imlay City Fire Department’s newest members—Ronny Young, Joe Ross and Mike Craven—are carrying on the time-honored tradition of serving their community through participation in the fire service.

Besides filling vital roles as members of the department’s new young guard, Young, 22, Ross, 28, and Craven, 34, have other things in common.

All three are Imlay City High School graduates, who realized early on the importance and rewards of serving in one’s home town.

Indeed, Young and Ross have firefighting pedigree running through their veins. 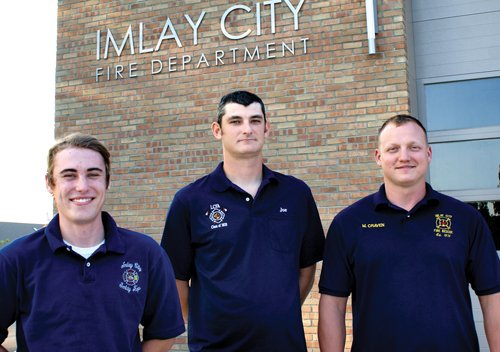 Newest Imlay City firefighters, Ronny Young, Joe Ross and Mike Craven, exemplify the spirit of giving back and serving one’s community through their shared participation in the fire service.

Young is the son of former Imlay City Firefighter Janice Young; one of a handful of female firefighters to have served the department over the years; while Ross is the son of Craig Ross, a veteran Imlay City firefighter, who also serves as a Lapeer County law enforcement officer.

Fire Chief Rick Horton views the new members as being valuable additions and essential to the present and future of the department.

Firefighters Craven and Ross recently completed their 400 hours of Firefighter I and II training at Lapeer County’s Firefighting Academy.

Horton acknowledged and credited Craven and Ross for their dogged tenacity in completing their training in the midst of the pandemic.

“These guys faced the additional challenge of having their training shut down for three months because of COVID,” Horton said. “I’m proud of them for sticking with it and for following through with their training.”

Craven, who is married and has four children, alluded to the sacrifices required of those interested in becoming firefighters.

“It’s a real commitment,” he said. “I’ve got kids and responsibilities and its tough on the family. You need to have the support at home to do this.”

Nevertheless, Craven believes the long hours, extensive training and personal sacrifice have been worth it for him and for his fellow firefighters.

“I’ve known and grown up with these guys,” he said. “And we’re proud to be able to do this.”

A lifetime Imlay City resident, Young said firefighting is in his blood and recalls visiting the old Imlay City fire hall on Third Street as a child.

“With my mom being on the department, I think I’ve always liked being around it,” said Young. “I still remember going on a field trip to the old hall when I was a kid. I know what being a firefighter is about.”

Ross, a U.S. Army Reservist from 2014-2018, said he felt a responsibility to serve his fellow Imlay City residents.

“I feel like Ronny and I grew up around firefighters like they are family,” Ross said. “To me, the fire department is like a big family.

“When I heard the fire department was hurting for new members, I made the decision to join up.

“In some ways I’m following in my father’s footsteps,” he added. “I enjoy serving and I like being able to help people.”

More help is exactly what Horton says is needed to ensure that Imlay City and Imlay Township residents are well served by their fire department.

“I’m so pleased we now have three young guys who are committed to being firefighters,” said Horton. “We’re happy to have them, but we still need more people to join the department.”

Horton hopes that moving into the new fire hall on East Borland Road soon will yield yet more applicants in the near future.

“These guys will be a big help,” said Horton, “but we need to be able to recruit more new members.

“All of our local departments are hurting for people, and so are we,” he continued. “It takes special people to do this.

“We encourage anyone in our community with an interest in fire service to contact us,” Horton said. “We can use your help, and you would be helping your neighbors and fellow residents.”

Those interested in serving on the Imlay City Fire Department may talk to any firefighter or call 810-724-6262.