Raiders get victory over Sandusky 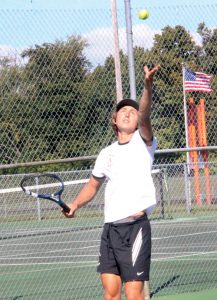 As far as doubles play was concerned, Tony Tabacchi and Jerry Schurig furnished a 7-6, 7-6 top flight triumph over Jackson Kartanys and Annie Ross; Rich Rockey and Markie Schlanderer dropped a 1-6, 4-6 verdict to Caleb Minard and Carson Shampo at second doubles; Matt Walker and Troy Pape fell by a 2-6, 4-6 third flight count to Dylan Kartanys and Parker Ulfig; plus Randy Graham and Hunter Vallus dropped a 2-6, 1-6 verdict to Jacob Papp and Gabe Drabant at fourth doubles.