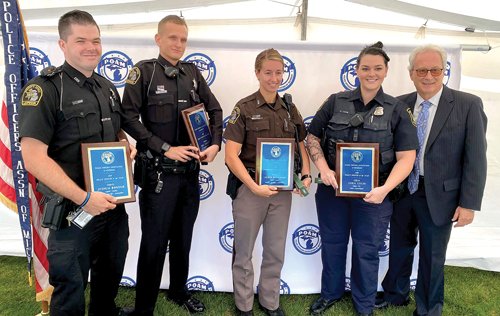 LAPEER — Four police officers who responded to the scene of a fatal February 2019 house fire in Imlay City were honored last week by the Police Officers Association of Michigan (POAM) as their “2019 Officers of the Year.”

Imlay City Officer Sara Colin and Lapeer County Sheriff Deputies Joshua Bandur, Lauren Brockmann and Eric Kanyak were due to be formally recognized at POAM’s annual convention in Grand Rapids this past May but the pandemic required those plans to change. Instead, POAM President James Tignanelli presented the officers with their awards on Thursday outside the Lapeer County Sheriff’s offices in Lapeer.

“Through the chaos and trauma, Bandur, Brockmann, Kanyak, and Colin maintained a professional demeanor that demonstrated their bravery in dealing with the stress of the enormously harrowing experience,” Tignanelli said, referring to their efforts on scene of the blaze that claimed the lives of four Kelley children—six-year-old Keith II, five-year-old Keyondre, three -year-old KeyannaRae and 28-day-old Keyairah.

Celebration of life services were held for the children in August 2019 at Imlay City’s Lamb Steele Park. In the children’s obituary, family members thanked fire fighters, first responders and police “for all of their dedication and efforts to care for the family’s needs.”

Tignanelli noted that the officers helped firefighters remove the victims from the burning home and rendered medical aid to them, including performing CPR. He noted that Deputy Kanyak also accompanied the victims to the hospital and “was instrumental in the victims’ care even after arriving in the emergency department.”

He noted that ceremonies such as Thursday’s can remind the officers of the traumatic events of that day and reminded those in attendance of the union’s Lifeline Program that allows officers to connect with a mental health professional at no cost.

Those who responded to the scene of the fatal fire have been honored by other organizations in the past. In June of last year, Colin, Bandur, Brockmann and Kanyak, along with firefighters from Imlay City and Attica, were honored at the Heroes’ Night award program hosted by the Hundred Club of Genesee, Lapeer and Shiawassee counties.