Archway to be restored

IMLAY TWP. — The restoration of a piece of local history is now underway.

Last month, the archway at the Imlay Township Cemetery was carefully removed from its supports and transported to Rick Thompson’s workshop where he’ll revive the cast iron signage that’s likely more than 150 years old.

Earlier this year, the Imlay Township Board opted to have Thompson Heritage Woodworking repair the upper portion of the gate for $3,100.

Thompson, also of Imlay City, shared photos of the project on his business’s Facebook page. 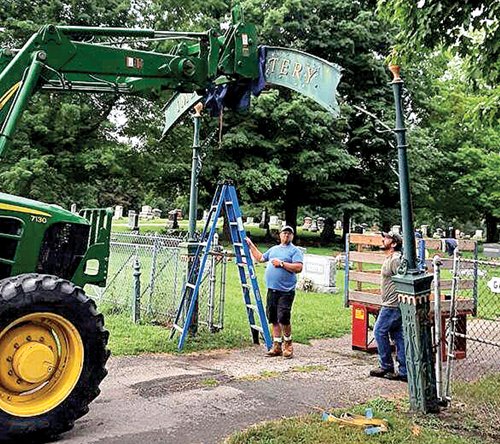 The cast iron archway stands over the second drive from the south, facing Fairgrounds Road.

“It’s not woodworking, but being a fan of history and having worked with and refurbished many, many tons of vintage cast iron in our shop over the years, it seemed like a pretty good fit,” Thompson said.

“It’s a beautifully built gate and the artisans who put it together over 100 years ago were most definitely highly skilled craftsmen. We’re looking forward to giving it the attention it deserves and making it look beautiful again before it gets reinstalled at the Imlay Township Cemetery.”

According to information compiled by the Imlay City Historical Commission, the cemetery dates back to the 1850s. When it was acquired by the township, gravestones indicated that someone had been buried there in 1855. Death records weren’t officially kept in Lapeer County until 1867.

The original panels or doors of the cemetery gate were restored by the Commission about eight years ago and are currently on display at the Imlay City Museum.

Carla Jepsen, Imlay Township clerk and Imlay City Historical Commission board member, said they don’t know for sure if the panels and archway were installed at the same time or created by the same artisans.

“We know for sure the gates at the museum are the original ones,” Jepsen said.

They were donated to the museum by the township in the 1990s and sat in storage for some time before the restoration was complete.

If not original, the archway was likely installed early on in the cemetery’s history, she added.

Helping Thompson remove and transport the archway was Stoldt Farms and Gary and Matt Elling.

Thompson said he plans to post updates on the archway project as it progresses.