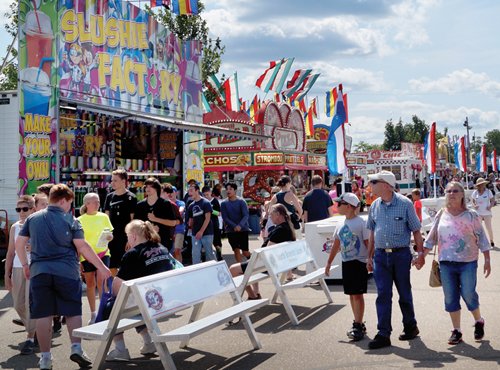 Attendees stroll past food vendors during the 2019 Eastern Michigan State Fair in Imlay City. Guests have a chance to dine on traditional fair dishes at the Fair Food Feast.

IMLAY CITY — If you regret having missed out on your share of fair food this summer because the 2020 Eastern Michigan State Fair was scaled down due to the coronavirus, never fear.

To accommodate the appetites of those who would have attended the annual fair, the Eastern Michigan State Fair Board is hosting a “Fair Food Feast” at the fairgrounds this weekend, September 18-20.

Fair Board Manager Ian Kempf said attendees of all ages can expect to find a veritable smorgasbord of traditional fair cuisine.

The event will coincide with Saturday’s, Sept. 19, Imlay City Area Chamber of Commerce’s 2020 live auction to start at 4 p.m. The annual Chamber fundraiser will take place beneath and in proximity of the fairground’s new white dome.

Money raised from the Chamber auction is critical to the organization’s future operations and for coordinating traditional Chamber of Commerce-sponsored community events.