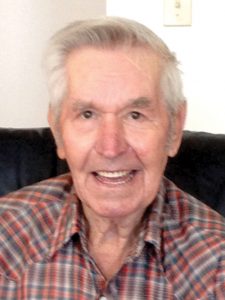 Farris Maphren Brown, 90, of Imlay City, passed away at his home on September 11, 2020. Farris was born in Paragould, AR and orphaned at a young age. He moved to Michigan and married Lourene Schalau in 1951 in Imlay City. He had a long career with the telephone company, where he was known to all as “Arkie,” while taking care of his farm north of Imlay City. He and his sons built the family home where he passed away peacefully 60 years later.

During his lifetime, Farris visited 49 states and most of Canada, including driving to Alaska in the family motorhome in 1976. He was always proud to have a woodpile large enough to warm the family for several winters and spent so much time in his woods that he made the papers for charming a grouse out of the trees and taming it. He could fix anything, build everything, run up telephone poles, loved music and to sing, taught generations to yodel, outran his boys in footraces into his senior years, swam like a fish, was a crack shot, a shrewd businessman and a terrific husband, father, friend and neighbor.

He is preceded in death by his parents, Fern and Thelma Brown; foster parents, Cleo and Francis Blyeth; sister, Reba Seidell; and son, Dale Brown.

Those wishing to make memorial contributions may direct them to McLaren Hospice, in thanks for the phenomenal care they provided the Brown family.

Please be sure to sign the online register book at muirbrothersfh.com to share your memories and condolences with the Brown family.