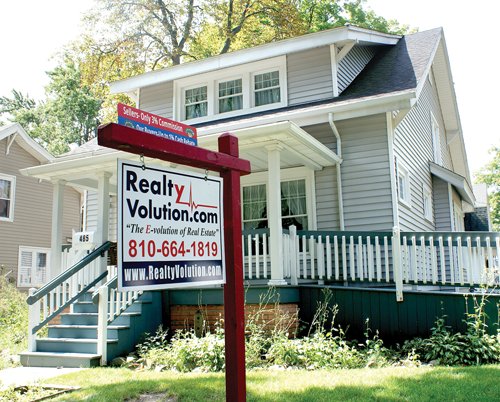 This family home on Main Street in Imlay City is listed among the hot properties being sought out by highly-motivated buyers looking to move from the cities and suburbs to more rural areas.

Local market unable to keep up with the growing demand

TRI-CITY AREA — Despite being in the midst of a pandemic, area realtors are experiencing nearly unparalleled numbers of clients wanting to buy and sell homes and properties in the Tri-City area.

The simultaneous interest in rural properties may be attributed to historically-low interest rates, coupled with an apparent exodus of people from Detroit’s suburbs to the rural countryside.

Whatever the reason for the surge in sales, Sharon LaFrance of Imlay City-based State Wide Real Estate Mainstreet, is taking note of the exploding market.

“I’ve had some listings where a house will go up for sale, and two hours later it’s sold,” LaFrance said. “Just today (Thursday) I listed two Almont properties and we’ve already had multiple offers on each of them.”
LaFrance said other local realtors appear to be experiencing the same level of interest.

“Right now, we’re looking at a seller’s market like I’ve never seen before in my 30 years in the business.”

Though the coronavirus outbreak and accompanying business shutdowns had an initial negative impact on her business, LaFrance said the recent influx of customers is helping make up for the earlier loss

“When COVID hit, I think a lot of people were afraid to list their homes,” she said. “It was a real challenge for us to have to do closings on Zoom.

Alex Lengemann, owner of RealtyVolution equates the strong local housing market to a perfect storm of conditions and circumstances that include fallout from the coronavirus.

“The market is incredibly strong,” said Lengemann, “in fact the strongest I’ve ever seen in 21 years.

“I thought COVID would have had the opposite effect and that the market would decline due to the loss of employment for many,” he opined. “But the economy is back strong and demand is high.”

Lengemann believes that low interest rates (below 3%), along with a high demand for rural properties, has been the recipe for increased interest and higher prices locally.

“Homes are selling in days,” Lengemann said. “I can’t count the number of homes I’ve sold this year in just days, and usually in bidding wars.

“It really is crazy right now,” he said. “I have 19 homes listed for sale, and every single one is sale pending. I can’t keep any available for more than a few days.”

Also noticing the surge in sales of local properties is Amy Forti, an agent with RealtyVolution.com.

She associates the dramatic increase in interest for rural housing to some ongoing societal changes resulting from the pandemic.

“Houses are going very fast,” said Forti. “I think it has to do with people moving from the more densely populated areas to the country.
“Right now they can take advantage of the existing market to move where they can get more house and more land for their money.”

Forti also attributed the surge in rural property sales to the huge swath of people who have been working from home since the outset of the pandemic and now prefer that option.

“I think the pandemic has definitely been a factor,” said Forti. “More people are working remotely and not having to drive to work and back every day. “

Lengemann thinks that new level of freedom has incentivized many workers to move from more populated areas to rural areas.

“People are no longer having to live near their offices and workplaces,” said Lengemann. “That enables people from the cities and suburbs, who can now work from home, to move out to the rural areas.”

Also sharing that opinion is local realtor Justin Herbert, who for the past six years has owned and operated Movement Realty in Imlay City.

Herbert said the local real estate market had already been hot before the pandemic and has managed to sustain its value throughout.

He reminded that the housing market in general had experienced a low point in late 2008 through 2010, due to the collapse of the banking industry.

Now, more than a decade later, Herbert observes that many of those affected by the economic downturn have lifted themselves back up financially.

“There are a lot of people able to qualify for home loans now, whose credit would not have allowed them to qualify a few years ago,” Herbert said. “These are people who rode out the hard times and re-established their credit and are now in the market for homes and properties.”

Herbert pointed to the comparative benefit of home ownership versus renting a home as yet another factor in the robust market.

Moreover, though, he sees the lure of quieter, less congested communities and environs as being particularly appealing to today’s home buyers.

“People like their land and they like their privacy,” Herbert said. “And many young families want to buy property where their kids can go outside and play.”

Like his fellow agents, Herbert sees the existing conditions as the ideal time to buy.

“From what I’ve seen, this is the best time ever to buy or sell a home,” he said. “And as an agent, we are the people who know what’s going on and of what’s coming next in the market.”

There may be myriad reasons why the demand for local homes and properties has shot through the roof, but local realtors are now having to work hard to keep up.

Apparently, it’s a challenge they are ready and willing to meet.