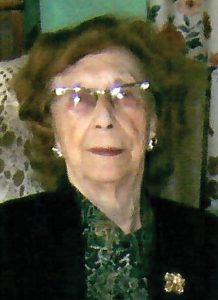 Lorraine Warren, 105, of Almont passed away Friday, September 4, 2020 in her home. She was born May 28, 1915 in Almont. Lorraine was a lifelong resident of Almont, living in the same home since she was 5 years old. She earned her Master’s Degree in Education from Wayne State University and accepted a teaching position at Dryden Community School. She enjoyed teaching at Dryden her entire career, eventually becoming the elementary principal. After retiring she continued to substitute teach in Almont, Dryden and Capac schools into her 90s.

Lorraine enjoyed traveling, first with her late husband Elmer then with family members and friends. She was always excited about planning a new trip with her travel club. She liked to square dance and was instrumental in starting the Square Dancing Club in Lapeer County. She and Elmer were the first family to host a foreign exchange student in this area, Hans from Germany. He became part of her family and they continued to take turns visiting each other regularly.

She was a member of Delta Kappa Gamma, and St. John’s Lutheran Church in Capac. She loved animals and later in life had three favorite Cocker Spaniels, Muffy, Misty and Millie.

Lorraine is survived by her cousin, Richard Soules of Gross Pointe.

She was preceded in death by her parents; and her husband, Elmer.

Private funeral services will be held.