Gov. Whitmer lifts restrictions on football and other fall sports

TRI-CITY AREA —The agonizing wait is finally over with. Traditional fall sports such as football, boys’ soccer and volleyball have finally been given the go ahead by state officials to resume their schedules.

The fall 2020 football season headlines that list, having been reinstated last Thursday by the Representative Council of the Michigan High School Athletic Association after Governor Gretchen Whitmer’s Executive Order 176 lifted restrictions that previously did not allow the sport to be played. 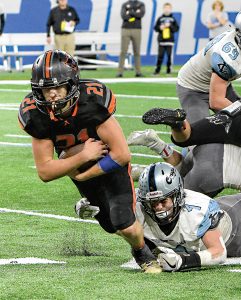 “I am extremely happy our boys will get to play football under the fall lights,” Almont Coach James Leusby said. “I know when we informed the players at Thursday’s practice of the MHSAA reversal to play football this fall there was not a dry eye in the house and that included mine,” he noted.

“We can’t wait to get the season started. It won’t be long now until we are back at it again.”

Whitmer’s executive order also allows for an immediate start of competition for boys’ soccer and girls’ volleyball today (Wednesday, September 9) for schools located in regions 1-5 and 7 based on the MI Safe Start Plan. It sets spectator limits of two per participant for outdoor and indoor events in Phase 4 of the MI Safe Start Plan.

Statewide, football and competition in those regions for boys’ soccer and volleyball had been restricted as part of Executive Order 160, which ordered gyms to remain closed and required social distancing in competition to prevent the spread of COVID-19 in areas under Phase 4 of the Safe Start Plan. Schools in Region 6 and 8 have been able to play soccer and volleyball because those regions have been under fewer restrictions while in Phase 5 of the reopening process.

The MHSAA’s Council had authorized on August 20 the start of competition in volleyball and soccer, pending the authorization of that activity in the specific regions by Whitmer’s office. The Council also on August 14 postponed the fall 2020 football season to spring 2021, but voted Thursday to allow for a shortened season this fall.

Schools are not required to play any of those sports this fall, and may postpone until this spring. However, the MHSAA will conduct its postseason events for those sports only for the fall 2020 season.

“We are thankful for the opportunity to get kids back out on the field in all fall sports and we appreciate Governor Whitmer providing that opportunity with Executive Order 176,” Michigan High School Athletic Association Executive Director Mark Uyl said. “We share the Governor’s priorities of putting health and safety first and the COVID-19 guidance and protocols designed by the MHSAA at her request have led to safe starts in all sports across the state,” he noted.

“Thirty three states are currently participating in all fall sports and the MHSAA and its member schools are doing this as safely as possible. We are ready again to provide these experiences to students and communities for a return of some normalcy. Given the challenges of online education in many school districts across the state, providing sports and a daily routine may be more important than ever in motivating students and providing a safe outlet for physical activity, competition and socialization.”

Football teams previously had been allowed to practice in helmets only during the traditional first week of practice, which began August 10, and then during Council-approved offseason contact days beginning August 24. With the reinstatement of of this fall’s season, football teams had to cease all activity until yesterday (September 8), then practice two days in helmets and shoulder pads before adding full pads September 10.

They may begin regular season games September 18 with their regularly scheduled Week 4 contests. All football teams in 11 and 8-player football will qualify for the playoffs during this fall’s shortened season, and then advance through their usual postseason progression with 8-player finals the weekend of November 27-28 and 11-player finals the weekend of December 4-5.

All other fall 2020 tournaments will be conducted as previously scheduled.