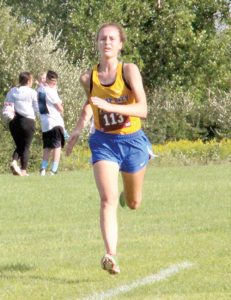 Imlay City’s Sydney Kapushinskl sprints to the finish-line during a meet last Wednesday in Lapeer.

Rolland Warner Middle School, in Lapeer, is where the action unfolded.

Imlay City’s winning total was 27 points. Lapeer took second, thanks to an output of 37 points, and Holly tallied 68 en route to third.