Kautz cards an 82 for Almont

ALMONT — The Almont girls’ golf team posted an output of 389 en route to a two-way tie for 10th place at the Troy Invitational last Thursday. 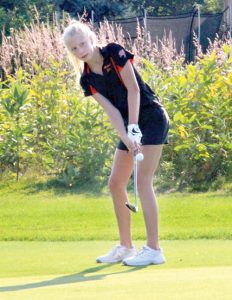 Almont’s Jesse Kautz hits to the green in a match last week.

Rochester Adams finished the day atop the standings, thanks to a 317 total. Stoney Creek (347) and Bloomfield Hills (357) took second and third, respectively.

Brandi Kautz led Almont with an 82 over 18 holes. Her effort was the 12th best score carded that day.