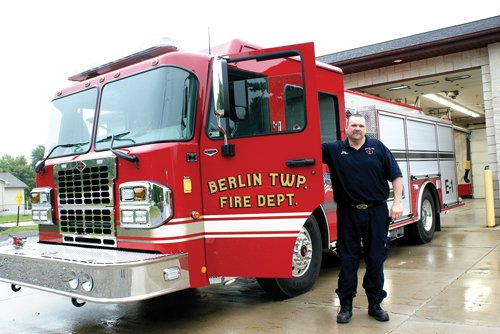 Berlin Township Fire Chief Dave Hartway is pictured outside the fire hall with the department’s new pumper truck, which replaced a 30-year-old vehicle whose condition had seriously deteriorated.

If approved, the proposed 10-year increase would begin in 2020, and conclude in 2030. The estimated annual revenue to be collected during the first year of the levy would be $183,902.

Berlin Township Supervisor Bill Winn said the amount raised would be subject to annual state-mandated Headlee Amendment reductions, but should raise an additional $1.5 million for equipment and apparatus needs over the full course of the levy.

Winn and township officials have detailed why the equipment millage is needed on the Berlin Township Fire Department’s Facebook page.

“After 40 years, the time has come to ask our community for an equipment millage,” the post reads. “The cost of vehicles, equipment, fuel and maintenance have increased significantly, making it more difficult to maintain an efficient, effective fire department on the current budget.”

Winn, who supports the millage increase, believes the township and its residents need to step up in support of the fire department.

He noted that like all Michigan fire departments, Berlin’s department must adhere to state-required vehicle and safety mandates.

“These improvements are necessary for us to be in compliance with state mandates,” Winn pointed out. “There is a limit to the life of equipment and vehicles and they don’t run forever. They eventually need to be replaced.”

While he laments the costs associated with maintaining and sustaining the fire department, Winn supports the Nov. 3 millage increase believing that its passage will be mutually beneficial to the fire department and Berlin Township residents.

“Our fire department takes pride in what they do,” he said. “We need to support them and give them the equipment they need.

“We could continue to try to scrimp our way through this,” Winn continued, “but that only sets us back even further.”

Fire Chief Dave Hartway said a millage increase has been needed for some time—possibly dating as far back as 2009, when he joined the Berlin department as an officer.

“We need new air packs, radios, thermal imaging cameras and other items that have to be updated to be compliant with state regulations,” Hartway said. “These things are needed to better serve our residents and to keep our firefighters safe.

“The current budget does not meet our current needs,” he continued, “and we have more needs coming up.”

Hartway said the department’s tanker truck, with a replacement cost of about $400,000, and rescue vehicle are also in need of replacement.

“A lot of people see what we have and they think we don’t need new equipment,” he said. “But we have to have the extra funding to be the fire department we want and need to be.”

Winn said the township recently invested $375,000 in the purchase a new pumper truck for the fire department which replaced an outmoded 30-year-old vehicle.

He said paying off that balance would be a priority if the 1.5-mill increase is approved on November 3.