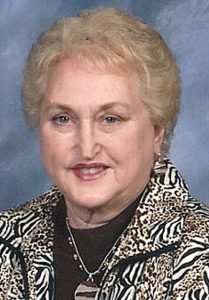 Arretta Burton Jickling Hill, 81 of Lapeer (formerly of Brown City) went to be with her Lord and Savior on August 29, 2020.

Arretta was born on March 29, 1939 in Kentucky to Herbert and Cleo Burton. She grew up in the Brown City area and graduated from Brown City High School in 1957. She married Wayne Jickling in July of 1957 and they were married for 32 years before Wayne was killed in a wood cutting accident.

Arretta taught at several rural schools including the K-8 one room school house in Deanville until the school closed. She went on to teach English at both the junior high and high school level in Imlay City for over 34 years. At the end of her career she was the high school librarian for the Imlay City High School. During her years at Imlay City she shared her love of literature and often took her students on field trips to experience literature coming to life through plays at Meadowbrook and Stratford theaters.

In 1994 Arretta retired and married Lawrence Hill of Brown City. Larry and Arretta enjoyed wintering in Mercedes, TX. Arretta became an expert at shuffleboard while in Texas, a hobby she shared both with her husband, Larry, and her sister, Anna Hill. She and Larry were also avid travelers and visited many places in the United States, Europe and the Caribbean. They especially loved cruising, with one of their favorite cruises being through the Panama Canal. In 2017 Arretta fulfilled a lifelong dream of visiting Israel on a tour of the Holy Land.

Throughout her life, Arretta’s faith was very important to her. She came to know the Lord as a teenager while attending Brown City First Baptist Church. She often spoke on how she saw the hand of the Lord on her throughout all aspects of her life. It was her faith that sustained her during the loss of her son and two husbands as well as during her most recent time of illness. Arretta lived out her faith through her service to the Lord over the years as a Sunday School teacher, teaching Bible School and serving in other areas in the churches she attended. Most recently she was a deaconess at Calvary Bible Church in Lapeer. Arretta also had a desire to reach people in other parts of the world and she had the opportunity to go on several short-term mission trips to Mexico, Peru and the Dominican Republic. She enjoyed ministering to residents at several of the local nursing homes with her friend Diane Haynes.

Arretta taught herself to sew and over the years made many clothes for her family, including princess dresses for her great-granddaughters. Arretta surrounded herself in nature’s beauty through the flower gardens around her homes in Michigan and in Texas.

Arretta believed very strongly in family connections and was considered to be the matriarch of her family. She was the glue that kept the extended family together throughout the years with the family reunions she coordinated each year.

In lieu of flowers memorial contributions can be made to Calvary Bible Church.

Visitation will be at Lynch & Sons Funeral Directors – Capstick Chapel on Thursday, September 3 from 2-7 p.m. Due to the current restrictions on social gatherings, a visitation in the traditional sense where people would gather together and visit for long periods of time is not permitted. However, it is important to Arretta’s family that there is an opportunity for family and friends to enter the funeral home briefly and pay their final respects. With that in mind, visitation will take place at Lynch & Sons Funeral Directors – Capstick Chapel in Lapeer on Thursday, Sept. 3, 2020 from 2-7 p.m. In an attempt to avoid large groups of people arriving at the funeral home at the same time, the funeral home and family have established designated visiting times:

Please adhere to the designated arrival times. If you are unable to come at the designated times you are still welcome. Be advised that no more than 10 people are allowed in the funeral home at a time, so we would encourage your time paying your respects be kept brief. Masks are required and please practice social distancing.

A funeral service will be held at Calvary Bible Church on Friday, September 4 at 11 a.m. Pastor Jeremy Lazell will officiate. For those unable to attend the funeral, it will be broadcasted live on Lynch & Sons Funeral Directors – Capstick Chapel’s Facebook page. Arretta will be laid to rest in the Evergreen Cemetery in Brown City.