TRI-CITY AREA — The Representative Council of the Michigan High School Athletic Association approved last Thursday the start of competition in girls’ volleyball and boys’ soccer in regions authorized for that activity by Governor Gretchen Whitmer’s executive orders, with competition in those sports pending in regions where those activities are not yet allowed as part of preventing spread of COVID-19.

Schools in the northern Lower Peninsula and Upper Peninsula, designated as Regions 6 and 8, are allowed to start competition August 21 as originally slated. Schools in Regions 1-5 and 7 may continue outdoor practices, pending further executive orders allowing for the opening of indoor facilities and physical distancing while competing in those areas. 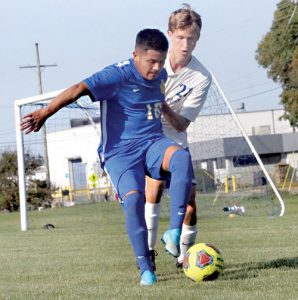 MHSAA staff was authorized by executive order to create all guidance for a return of school sports, and over the last eight weeks has worked to fulfill this mandate while complying with all of Governor Whitmer’s executive orders. The Council was prepared to approve competition last Thursday in volleyball, soccer for all regions, but was unable to do so because of questions remaining on which activities are still not allowed.

“Our Council has made clear it is ready to offer students these opportunities pending approval from Governor Whitmer that we may do so,” MHSAA Executive Director Mark Uyl said. “We have been told within a week, future guidance will address athletic issues that exist in current executive orders and are awaiting that guidance,” he noted.

“The MHSAA and Representative Council are committed to following all current and future Executive Orders and safety precautions. However, we need more answers before we can give all our member schools the go ahead to play each other again and the majority of our schools are in regions that are not yet allowed to take part volleyball and soccer.

For attendance purposes, schools in Regions 6 and 8 may have indoor volleyball a total of 250 people or 25 percent of a facility’s capacity, whichever is smaller.

Outdoor competitions in Regions 6 and 8 may have 500 people or 25 percent of capacity, whichever is smallest. For both sports, the number of people allowed to be present include all participants, officials, school and game personnel, media and fans.

The Council also approved out of season coaching adjustments allowing football and spring sports coaches more contact with their athletes in advance of the 2021 season.

To provide additional offseason activity for sports that have had their full seasons canceled or moved, the Council approved 16 contact days for football and all spring sports to be used for voluntary practices among students from the same school only. Football may schedule their contact days from August 24 through October 31. Spring sports (baseball, softball, girls’ soccer, track, boys’ golf, Upper Peninsula girls’ golf, Lower Peninsula girls’ tennis and Upper Peninsula boys’ tennis) may schedule their 16 contact days for voluntary practices from September 8 to October 31 if the school permits and safety protocols are followed.

Football and all spring sports may conduct skill work with coaches and up to four players at a time, beginning November 1 until the first day of official practice this upcoming spring. Coaches also may work with an unlimited number of players on general conditioning during that time.

A calendar for the inclusion of football into Spring 2021 will be released later this fall, upon Council approval at a later meeting.