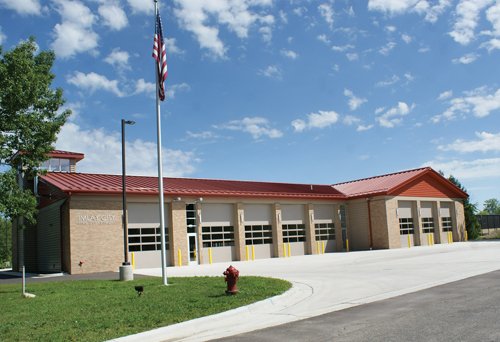 The new fire hall’s outward appearance belies some lingering problems that will need to be remedied before the Imlay City Fire Depatment can permanently occupy the building.

IMLAY CITY — It was on June 26 that Imlay City officials and firefighters hosted a ribbon-cutting/open house at the new fire hall on East Borland Road.

More than 150 people showed up that evening to celebrate the occasion, which included speeches, tours of the facility, lots of smiles, COVID-necessitated elbow-bumps, and plenty of congratulations to go around.

The reason the fire department has not been able to move into their new $3 million fire hall is apparently due to unresolved construction and building-related issues.

One of the primary reasons for the fire department’s delayed occupancy is because rainwater has been entering the building from beneath the new facility’s bay doors, possibly attributed to uneven concrete application in front of the doors.

On Tuesday, Aug. 18, Mayor Joi Kempf pointed out that major projects are often beset with issues that reveal themselves upon and after completion.

“It’s not uncommon for these kinds of things to happen,” she said. “But they will need to be resolved.”

New City Manager Craig Horton said he had contacted representatives from H2A Architects, Superior Contracting and Rowe Engineering to schedule a walk-thru of the building.

Horton noted that all fire hall construction work is under warranty for at least one year.

“It doesn’t look like anything insurmountable,” said Horton. “But having to tear up that concrete could be a big job.

“No matter what, any concrete-related issues will need to be taken care of before
the cold weather arrives.”

He said that problem may have been resolved this week by staff from Superior Contracting.

“Their foreman climbed up on the roof and discovered there was no sealant in the area of the leak,” Horton said. “That issue appears to have been fixed.

“Of course, we won’t know that for certain until there’s another heavy rain.”

Fire Chief Rick Horton is hopeful that firefighters can make the transition to the new hall within a matter of weeks.

“As things are right now, they’re working with us to get these things taken care of,” said Chief Horton. “But we’re not going to move into the new building until the cement issues are fixed properly.”