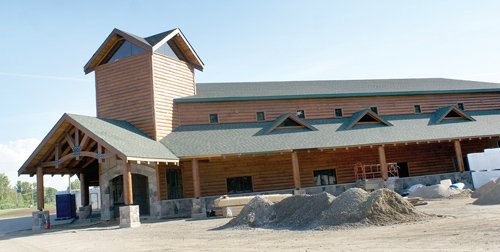 Construction materials sit outside the Country Smoke House. Due to various setbacks, the store is still a month out from reopening to the public.

ALMONT TWP. — Due to continued delays and setbacks, Country Smoke House owners, Steve and Sue Francis, predict that the business will not be able to reopen before late September.

It’s been more than 10 months since the popular meat-packing and retail business at 3294 Van Dyke Rd. was ravaged by fire.

While the business’s BBQ & Market trailer is now open every Friday, Saturday and Sunday from 11a.m.-7 p.m., the Smoke House’s meat processing capabilities are delayed and the retail business remains closed.

In a Facebook post dated Friday, Aug. 14, the owners cited difficulty in getting contractors to work consistently, noting that many of them are overworked and overbooked due to the COVID-19 safety protocols.

“Trying to get extra labor this year has been especially difficult,” they said. “Our stumbling block now is the assembling of the refrigerated panels,” the post said.

Family members point out that the loss of almost 12 months income, delayed payments from the insurance company, and displacement of employees has been distressing and dismaying.

“The contractor was only able to send one team instead of two teams as negotiated upon signing, thus taking twice as long to construct,” they said in the post. “We are doing everything in our power to meet the goal of opening at the end of September so we can accept deer on October 1st.

“The plan is to finish production areas first to start making products for retail and deer season customers.

“Please bear with us,” family members said. “There is no one that wants this place to open more than the Francis family and the CSH team. We miss socializing and serving our customers.”

Francis family members added that they regret not being ready for the traditional youth and early doe hunt.

Regardless of their shared frustration and disappointment, the Francis family acknowledged all those who have offered the family their support, loyalty and patience.

“We appreciate all the kind words and prayers that hundreds have sent via phone, mail, emails and Facebook,” they said. “Thank you for hanging in there with us. We cannot wait to see you inside our doors soon.”