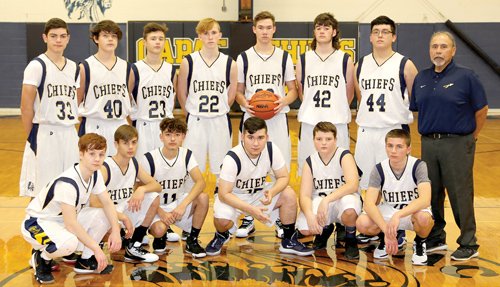 Mike Rosas (back row right) poses for a photo with the Capac junior varsity boys’ basketball team during the 2019-20 campaign. It was the final team he coached in his lengthy career at Capac.

CAPAC — Following 50-plus years coaching various sports programs, Mike Rosas has decided to call it a career at Capac.

“I want to thank all of you friends, family, parents and especially all the young men and women I had the pleasure of working with over the years,” Rosas said. “Like I have said to all of the teams I have coached, I am proud to have coached you, proud to call you my friends and proud of the young people you have become,” he noted.

Rosas began his lengthy stint at Capac when he helped out coaching little league basketball plus baseball while still in high school.

And that would prove just the beginning. From there he would help Don Smith build Capac into a highly regarded junior high basketball program, have stints as freshman and junior varsity basketball coach and assist at the varsity level.

On the football field, Rosas put in time coaching at the junior high, freshman and junior varsity levels plus as a varsity assistant.

He also contributed to the Capac athletic program in baseball as a junior varsity head coach and varsity assistant.

Here is a sampling of comments of posts on Mike’s Facebook page, a testament to a man who has given so much of himself to Capac’s athletic program throughout the years:

“Thanks to all the years you have dedicated to the youth,” Noah Mailloux said. “I would like to thank you from the bottom of my heart for every skill you taught me in both baseball and basketball,” he noted.

“More importantly, I want to thank you for being one of the biggest role models in my life. You are a great mentor and a friend. I feel sad for all the young Capac athletes that won’t be so lucky to have you as a mentor in their lives.”

Dan Pilgrim did not hold back on his regard for Coach Rosas either.

“It was an honor to be coached by you.” Pilgrim said. “You are one of the reasons I became a coach,” he noted.

“You inspire, teach and most of all care about about the players you coach.”

Nathan Lietz also had the privilege of playing on his squads and coaching with Rosas.

“Congrats and thank you for everything you have done for the school, community and the kids. “I wouldn’t have wanted to play/coach with anyone else,” he noted.

Count Justin Schocke, who played football under the guidance of Rosas, as a fan as well.

“Coach Rosas was great,” Schocke said. “I am glad to have had him as coach and a mentor growing up,” he noted.

“So many words of wisdom and advice. We were all so lucky to have had him as a coach on or off the field and court.”

Casey Bollaert, who played both football and basketball under his guidance, agreed it was a positive experience playing under the guidance of Rosas.

“He was a great coach,” Bollaert said. “We always had fun with him around,” he noted.

“I am thankful for him letting me be a chapter of his career.”