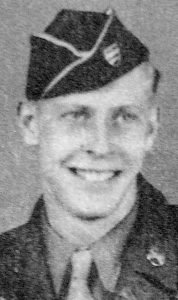 Harold Coates, 94, of Attica, Michigan died Friday, August 14, 2020 at home. Harold Proctor Coates was born September 14, 1925 in Flint, MI. He is the son of the late Proctor G. and the late Irene (Keener) Coates. He grew up in the Silvenvillage area near Pontiac. Harold graduated from Daniel Whitfield High School in the Pontiac Schools System. He served in the U.S. Army during World War II from 1943 to 1946. He was the recipient of the Bronze Star; Silver Star; Purple Heart; Infantryman’s Badge.

Harold married Suzanne Jo Allen on June 18, 1954 in Royal Oak, Michigan. He worked for Michigan Bell Telephone Company in South Eastern Michigan for 30+ years making equipment installations; managing Switching Stations in Mt. Clemens; and working in the Power group in Detroit. He retired from Michigan Bell Telephone Company in the 1990s. He was a member of Cornerstone Baptist Church in Inverness, Florida. They lived in Attica for years before moving to Hernando, Florida for about 30 years.

Harold is preceded in death by his parents; a sister: Mary Lou Ostien; and an infant brother.

There are no memorial services planned at this time.

Friends are encouraged to sign our online register book at muirbrothersfh.com to share memories and condolences with the Coates family.