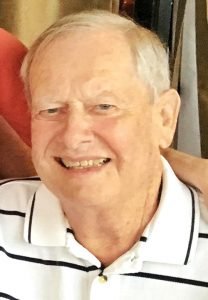 Charles Richard Kempf, 83, of Attica/Lum, MI died at home, Friday, August 14, 2020. Charles, known to his family as Dick and to his friends as Chuck, was born April 16, 1937 in Port Huron, MI. He was the son of the late Dr. Charles Frederic and the late Loretta (Brown) Kempf. Loretta died when Dick was two. His father remarried Helen Rogers who became Dick’s devoted mother. The family lived in Port Huron and always had connections to Imlay City, as his grandfather owned Kempf’s Shoe Store in Imlay City.

He married Christine Caroline Cole of Imlay City on August 8, 1959. Dick and Christy met as college students and became inseparable for the next 61 years. They created together a loving family with their children and extended family, hosting many social gatherings. At retirement, the couple moved from Port Huron back to Lum/Imlay City, and became snowbirds to Stuart, FL. They loved to travel and had many adventures around this country (especially Boulder, CO to visit grandsons) and the world.

Dick was a beloved husband, father, grandfather, sibling, cousin and friend to a lucky few. His humor was sharp and dry and he frequently delivered one liners that would leave everyone chuckling. He loved golfing, swimming, walking, boating and was an appreciator of art. He had a generous heart that made room for lots of different people…a gentle, kind, fun loving soul. Dick graduated from Port Huron High School in 1955, Central Michigan University where he earned his Bachelor’s Degree in Education, with an Art Minor, in 1959 and earned a Specialist Degree in Education from Eastern Michigan University. Dick served in the U.S. Army in the early 1960s. He was employed by Port Huron Area Schools as a school administrator for 32 years including being a liaison to Native American students and an elementary school principal. Dick and Christy have been long-time members of the Port Huron, Stuart, FL and Imlay City First Congregational Church.

Dick was preceded in death by his mother Loretta Brown Kempf; and his parents Charles and Helen Kempf.

The family is planning a private family memorial service in the fall.

Please be sure to sign the online register book at muirbrothersfh.com to share your memories and condolences with the Kempf family.