Kalmar said Board may opt to begin classes on Aug. 31

ALMONT — Almont School officials are expected to decide tonight, August 19, if they should delay the start of the 2020-2021 school year by one week, until Monday, Aug, 31.

The district’s plan was for in-person classes to begin with a half-day session on Monday, Aug. 24.

Schools Supt. Dr. William Kalmar said Tuesday that the starting date is now subject to change, pending approval by the Almont Board of Education. 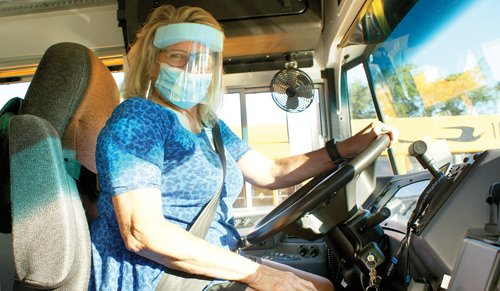 Kalmar indicated there appears to be support for a postponement, but that doing so would require a vote of the school board during a special meeting set for Wednesday evening.

Meanwhile, Almont school administrators, teachers and key staff are making the final preparations for the arrival of in-person students.

On Tuesday, Almont Schools’ Buildings and Grounds Supt. Bob Jones and an associate could be seen installing plexiglas in the high school’s front office, while office staffer Debbie Lemon readied the space for a much-anticipated influx of students on the first day of school—whenever it may be.

Simultaneously, Almont High School Principal Elizabeth Gallagher surveyed the cafeteria, where incoming freshmen and parents were scheduled to convene for an orientation session on Tuesday evening.

Gallagher pointed out some of the various safety measures in place to help ensure the well-being of students and visitors including mask-wearing requirements, hand sanitization stations throughout the building, and “X” or social distancing markings on classroom floors and in the school’s hallways.

Kalmar additionally noted that new water fountains will soon be installed, which will allow students to fill their own water bottles.

Over at the district’s bus garage, Kara Cunningham, Dean of Transportation said her fleet of 11 buses is “ready to roll” regardless of when the school year finally begins.

“As soon as we get the word, we’re going to be ready for the kids,” said Cunningham, a Dean employee for five years who recently moved to the Almont area from Muskegon.

Among those ready this week to transport Almont youngsters for another school year is veteran school bus driver (since 1989), Lourdes Schultz, who willingly modeled her protective face shield.