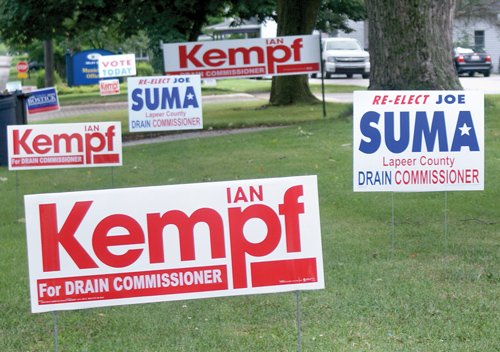 LAPEER COUNTY — Some voters were in the mood for change when they headed to the polls on August 4.

Incumbent Joe Suma managed to hold onto his job as Drain Commissioner. He fended off a challenge from Ian Kempf with just 173 votes separating them, according to the unofficial results.

Incumbent Circuit Court Judge Byron Konschuh came in second in a three-way race and gets a chance to face off against the first place finisher Mike Hodges in a November general election runoff.

Bryan Zender will become Imlay City and Almont’s next representative on the county commission. He topped fellow Republican Walt Bargen in the race to succeed Ian Kempf.

On the Democratic side of the ticket, Jerry Tkach has earned his party’s support to advance to the general election and face incumbent Gary Howell, a Republican, for the 82nd House District State Rep. contest. Just 81 votes separated Tkach and fellow Democrat Kurt Hausauer in the unofficial primary results.

Incumbent township supervisors managed to hang on to their posts too. Al Ochadleus earns another term in Attica, Tina Papineau will stay on in Dryden and Ron Cischke gets another four years in Goodland.

Other incumbents were successful in their re-election bids too. Pam Mason will keep her post as Attica’s Treasurer and in Almont Twp., incumbents Kimberly Streeter and Gary Groesbeck earned new terms as trustees. They’ll be joined by newcomers Rick Dodge and Randy Eschenburg. Similarly, in Dryden Township, voters selected incumbent Carol English and newcomer Brian Hazen for two trustee seats.

As for open seats, Valerie Schultz earned the most votes to become Attica’s clerk and Sue Lowney will be Dryden Township’s next treasurer.

As for proposals, voters approved the Lapeer County EMS renewal by a wide 10,000 vote margin. In Goodland Township, residents finally approved a roads millage request following several attempts by township leaders. Voters did not approve the library and parks proposals.

Here are the vote totals: