CN Railroad’s rejections result
in plan to reroute the project

IMLAY CITY — A 2020 infrastructure project to extend sanitary sewer from the railroad viaduct on M-53, east to the wastewater treatment plant, is being postponed until spring of 2021.

Priehs explained that the city’s original plan was to bore a new sanitary sewer line under the viaduct embankment on the west side of M-53.

However, CN Railroad rejected that plan and instead required that the sewer be installed down the middle of M-53, in the center of the viaduct span. 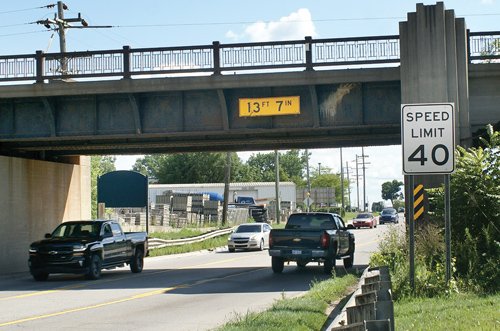 The project’s original plans would have resulted in a full, two-week closure of M-53 but engineers are working to reroute the line and avoid major traffic interruptions.

That would have required a full shutdown of M-53 for two weeks and detouring traffic off Van Dyke at Newark Road, west to Almont Avenue, and north to Capac Road (old M-21).

As an option, the city’s engineering firm, Spicer Group, Inc., is suggesting abandoning the original plan and redirecting the sewer’s flow to an existing 15-inch interceptor sewer that runs along the Belle River.  The proposed route change would eliminate the need for a total M-53 shutdown and detour. Nor would it require a permit from CN Railroad for replacement of the sanitary sewer.

According to Spicer, the alternate design plan would include conventional jack and bore installation beneath M-53 at Third Street, then extend the proposed sanitary sewer about 700 feet east to the interceptor sewer.

Priehs said the alternative being considered could be less expensive, but will include additional costs to Spicer for new engineering permits.

If the rerouting changes are approved, Priehs hopes the project can still go out for construction bids this fall.

At their August 6 meeting, Imlay City Commissioners approved an additional lump sum payment of $21,500 to Spicer to expedite the project’s changes.

The total project is estimated to cost $1.39 million.