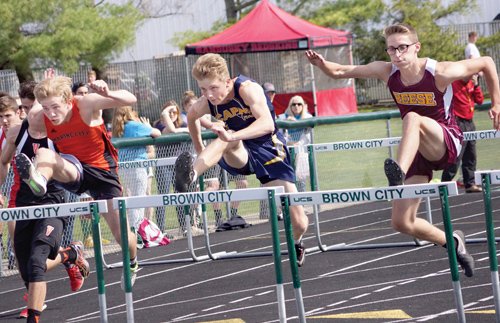 Capac’s Hank Barker (center) clears a flight of hurdles during a meet at Brown City his junior year.

CAPAC — Capac’s Hank Barker will attempt to make the Grand Valley State University men’s track team as a walk-on prospect during the 2020-21 campaign.

He entered his senior year coming off a strong junior season with the Capac boys’ track team.

In the 110-meter hurdles, Barker supplied a season-best clocking of 16.25 seconds. That paved the way to a first Friday, April 26 at The Hurd Invite in Vassar.

In the 300-meter hurdles, Barker supplied impressive credentials as well.

Over that distance, he managed a season-best time of 42.75 seconds for first Tuesday, May 14 at the Greater Thumb Conference East League Meet in Brown City.

No matter what the lineup Capac sent to the starting-line, success seemed to follow.

A team consisting of Aldrich, Barker, Griffith and Ellis registered a season-best 3:36.61 clocking en route to a third Friday, May 17 at a Division 3 regional hosted by Brown City High School.

Barker also landed a spot on the Tri-City Times All-Area second team for his prowess as a pole vaulter.