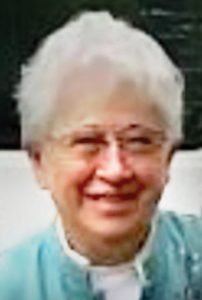 Audrey Reynolds Seidell, 88, of Imlay City, MI died Sunday, August 2, 2020 at United Hospice Residence of Marlette, MI. Audrey Marie Heron was born December 10, 1931 in Cass City, MI. She was the daughter of the late Allan and the late Reita (Sharrard) Heron. Audrey grew up in the Barnes Lake area (north of Lapeer). She attended Lapeer High School. Audrey married Ray Reynolds on June 12, 1948. Ray died in 2000. Audrey married Max Seidell on June 21, 2003 in Fostoria, MI. She has lived in Imlay City since 2003. Audrey was employed as a physical therapy supervisor for 30 years by Lapeer County Medical Care Facility (Suncrest) in Lapeer, MI. Audrey was a member of West Deerfield United Methodist Church and the United Methodist Women’s group. She enjoyed going to their cabin on the lake, spending time with her children and grandchildren, gardening, salmon fishing, and dancing. She and Max liked to RV camp and traveled out west, down south, and up into Canada. They were snowbirds, spending the winters in Florida. Audrey’s travels took her to Alaska with her first husband, Ray Reynolds; and to England and to Europe to visit her grand-daughter, Christie Reynolds.

She was preceded in death by her first husband, Ray Reynolds; her son, Ray Reynolds, Jr.; brothers, Samuel Heron and Donald Heron; and her great-granddaughters, Greta and Harriet Reynolds Nielsen.

Cremation has taken place and a private family memorial service was held Saturday, August 8, 2020 at Muir Brothers Funeral Home of Imlay City, 225 N. Main Street, Imlay City, MI. The interment of her cremated remains will take place at a later date at West Deerfield Cemetery, where she will be laid to rest next to husband, Ray.

Those wishing to make memorial contributions can direct them to Susan B. Komen Breast Cancer Foundation or to St. Jude’s Children’s Research Hospital.

Please be sure to sign the online register at muirbrothersfh.com to share condolences and memories with the Reynolds and Seidell families.