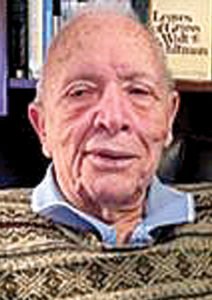 Aubrey Allen Crawford died August 3 in the late afternoon after having lived for 96 years, four months and three days. His heart gave out. He was a father of five, grandfather to seven and great-grandfather of eleven.

Aubrey said, a few days before his death, that he wasn’t sure he was up for dying as it seemed so final. I am sure these were not his final words, and don’t know what they were, though I was with him. But I will share this poem I found among his writings. As you know, he was thoughtful and had a lot to say…thank you for listening to him.
You Can Hide From Life, But Not From Death, A. A. Crawford

Still, the decades give us gifts–if we will accept them. Sometimes we see more clearly in dim vision, we may hear less and understand more. Our limbs grow weaker, yet we are stronger. Hearts flutter but courage does not vanish.

These gifts are offered even though we may refuse them. In becoming less we often are more. When we dare to open our eyes we see, And days do not overwhelm when we enter them fully and hold nothing back.

We can hold our breath, or accept each breath as a gift; and our last breath as our greatest gift. Knowing our journey ends only when we dare to return home.

You can avoid life, you can hold back, pretend, avoid, run. You can cheat, deceive, mislead and take whatever reward comes.