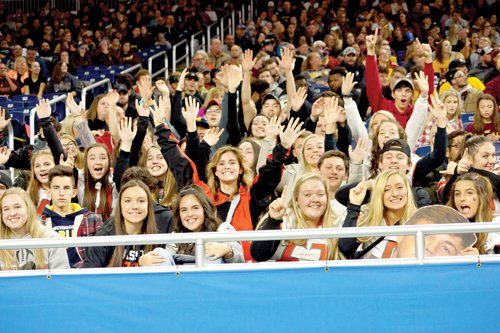 Fans cheer on the Almont Raiders in a football game last year at Ford Field. Another season is set to begin later this month.

TRI-CITY AREA — The Michigan High School Athletic Association’s Representative Council approved the next steps in returning member schools last Wednesday, adopting a plan to phase in competition for fall sports with the hopes of continuing to deter the spread of COVID-19.

The Council affirmed that lower-risk sports such as girls’ golf, boys’ tennis and cross country may begin practice on August 12 and begin competition on their traditional start dates of August 19 and 21.

However, moderate and high-risk sports such as football, volleyball and boys’ soccer may begin practice but not competition. Decisions for these three sports will be made by August 20.

Practice for volleyball and boys’ soccer may begin on August 12. Football will delay the start of practice with full player pads and equipment until Monday, August 17. The week of August 10 may include football practice sessions consisting of conditioning, physical training and skill work with no other player equipment except helmets. The week of acclimatization is similar to allowed summer football activities that have been ongoing since June.

The Council, the MHSAA’s 19-member legislative body, also voted to cancel scrimmages in all fall sports for this school year and approved limitations on numbers of teams that may compete together at regular season tournaments, invitationals and other multi-team events. The Council believed that eliminating scrimmages emphasized the importance of keeping teams from mixing before the first date of competition and the regular season limitations may lessen opportunities for viral spread while still allowing meets to be conducted.

As this remains a fluid situation, the MHSAA would release updated timelines for football, volleyball and boys’ soccer competition by August 20, depending on how the spread of the virus is trending statewide. Plans remain reliant on sustained metrics measuring virus spread and/or progression by schools and regions across the state according to Governor Gretchen Whitmer’s MI Safe Start Plan. Currently two regions are in Phase 5, which allow for limited indoor activity, while the rest are in Phase 4 and unable to host indoor training, practice or competition.

The start of volleyball is contingent on the reopening of indoor facilities. They may begin their practices outdoors if not allowed indoors by August 12.

“The Council, reflecting on the positive impact on their athletes this summer from taking part in offseason training, feels it is of the utmost importance to continue athletic activity moving forward,” MHSAA Executive Director Mark Uyl said. “It we take a month off our students will find opportunities to compete through non-school entities that may not be as focused on safety,” he noted.

Uyl then elaborated on those thoughts.

“Our athletic directors and coaches can provide the safest-possible environment to return to sports,” Uyl stated. “This phased-in approach to competition will help schools continue building on progress already made,” he noted.

“The council chose to make these adjustments to help ensure our athletes have a safe regular season this fall. As we continue to solidify the regular season, we can then turn our attention to building a safe postseason for our athletes.”

The MHSAA has also posted sport-by-sport guidance documents outlining increased precautions designed to limit the viral spread, plus a four-page overview with precautions that apply generally for all sports and include coverage of the following topics:

Transportation, use of locker rooms and facility cleaning.

Specific sport guidelines and the overview are available on the respective sport pages of the MHSAA website, all linked to mhsaa.com/sports.

Recommendations on spectator attendance will follow before the start of competition; spectators will be limited in accordance with Governor Whitmer’s executive orders on large gatherings.

The Council on July 17 approved a return to activity plan for the 2020-21 school year retaining the traditional calendar of fall, winter and spring sports, but allowing for the possibility that fall sports forced to halt activity during the next four months may conclude later in the school year.

“The easy way out would be to postpone all activity to next spring and we are not taking the easy way out,” Uyl said. “We will make wise decisions based on medical guidance,” he noted.

“We will make these difficult decisions quickly and appropriately. If we don’t play this fall, it won’t be because we didn’t make every effort to do so.”

The Representative Council is the legislative body of the MHSAA. All but five members are elected by member schools. Four members are appointed by the Council to facilitate representation of females and minorities and the 19th position is occupied by the Superintendent of Public Instruction or designee.