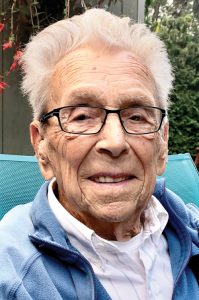 Howard was born in Ferndale on June 12, 1925, to Kenneth and Lena (Ropp) Boomer. He lived on a farm on Tubspring Road and attended school in Almont. His first job was delivering milk for Ebeling Dairy in the early 1940s.

Howard joined the US Army and was on the beach at Normandy on June 9, 1944. Being just shy of his 19th birthday, he was unable to take up arms right away. He spent three days in a foxhole waiting to turn 19 and then rejoined his outfit. He was wounded in action in September, 1944 and spent several weeks in a London hospital. He returned to combat late in 1944 and continued “walking across France.” Howard was honorably discharged in February, 1946. In addition to a Purple Heart, he was awarded three Bronze Stars for meritorious service in combat, a WWII Victory Medal, and a Good Conduct Medal.

After returning to the United States, Howard once again delivered milk for Ebeling Dairy. He married Betty Ann Gottschling in 1947 and together they had four children. Howard landed a milk route with Twin Pines Dairy in 1954 and he and Betty built a home and a life in Almont. His job with Twin Pines allowed him to purchase a northern Michigan cabin at Canada Creek Ranch (CCR) where his family spent many happy summers.

By the mid-1960s, Howard began working for Hamill Manufacturing, Inc. (now Romeo RIM, Inc.) as a supervisor and dispatcher. After retiring in 1982, he took a job making apple cider with a manual press at King Mill in Almont. He and his partner/grandson Aaron were on the job each autumn for a few seasons.

After retiring from cider-making, he began mowing lawns and doing odd jobs for his neighbors. He worked his way up to mowing about a dozen lawns around town. When he wasn’t mowing grass, Howard took delight in spending time with his children and grandchildren. He liked going to family parties and especially enjoyed being around the campfires in Almont and at CCR.

A celebration of the life of this delightful man will take place August 22, 2020 with visitation from 9-11 a.m. and funeral service at 11 at Muir Brothers Funeral Home in Almont. Chaplain Gordon Steinke from Residential Hospice will officiate. Burial will follow in Ferguson Cemetery in Almont.

Due to recent health concerns with the COVID-19 pandemic, social distancing (six feet apart), masks (to be worn at all times), and limited occupancy (10 people at a time) at the funeral home will be enforced.