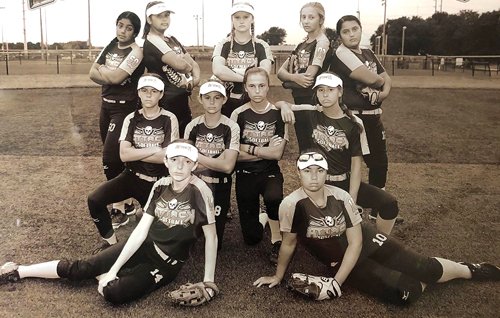 The Almont Attack 12U softball team poses for a picture at the All Sanction World Series. They are front (L to R) Lorelei Mahon, and Mackenzie Aguinaga; middle Tara Tencza, Brooklyn Bunch, Ashley Stafford and Isabella Makarewicz; and back Jada Lopez, Lainey Cannon, Jaycee Reams, Makayla Bruman and Sophia Helm.

TRI-CITY AREA — Almont Attack gave a good account of themselves, fashioning a 4-2 mark at the All Sanction 12U World Series this past week.

Columbus, Ohio hosted the tournament which ran from Thursday through Sunday.

The squad opened tournament action Friday with a 12-5 win at the expense of Team Combat (Kentucky).

Later that day, Almont Attack went to 1-1 with a 5-4 loss to Central Ohio Ice.

Saturday saw Almont Attack prevail twice. It was there the squad picked up a 9-1 victory over Emeralds ’07 (Ohio) and register a n 8-1 triumph against Buckeyes Elite.

Almont Attack then closed out play Sunday with a 15-1 win over Ohio Thunder and an 8-3 setback to Ohio Hawks, leaving them with a 4-2 tournament mark.

Ashley Stafford (Richmond) led the Almont Attack with a .692 batting average. Pontiac’s Jadalyn Lopez (.538 with nine RBI) and Clio’s Lainey Cannon (.500 with 11 RBI) made their presence felt as well.

Bunch, Bruman and Stafford headlined, winning the outfield accuracy event. Reams placed second in time for running the bases; and Cannon tied for homerun derby champion, but lost the event in a tiebreaker.

The Almont Attack finished the season as owners of a 51-8 overall mark.