The showing goes on

IMLAY CITY — Volunteers and local groups have stepped up to organize and facilitate animal shows at the Eastern Michigan State Fairgrounds this week.

The 2020 fair was slated to take place July 28-August 1 but the fair board voted last month to pare down the event to a youth exhibitor-only ‘Show and Go Showcase.’ Since then parent Michelle Peel and other volunteers have been busy creating a show schedule and securing judges.

“We feel it’s important this still goes on,” Peel said of the showcase.

On Saturday, a dog show was held and today, July 29, the dairy show will take place, followed by horses tomorrow. This weekend will feature beef, goat, rabbit, swine and sheep judging. No animals will be housed at the fairgrounds during this time. Exhibitors will be required to leave the grounds with their animals immediately after showing.

“The Centers for Disease Control released specific guidelines for livestock shows and so we’ve updated our procedures to reflect those,” Peel said, who’s also serving as the swine department superintendent.

The number of in-person supporters, spectators and family members allowed is very limited.

Peel credits the support of the Eastern Michigan State Fair Board for making this showcase possible. Earlier this year, the board opted to waive the registration fee for exhibitors. Additionally they are providing their facilities at no cost for the shows, handing out ribbons and more. 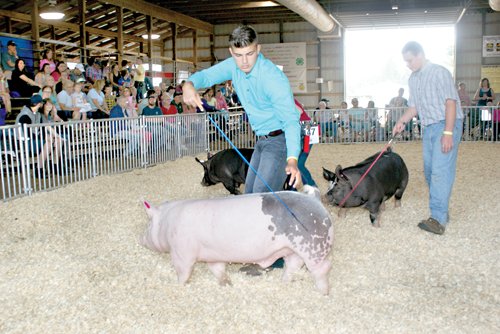 Exhibitors at the 2019 Eastern Michigan State Fair escort their pigs around the show ring. Hogs and other animals will be judged this weekend as part of the fair’s ‘Show and Go Showcase.’

“Lapeer County Farm Bureau has also stepped up to be an event sponsor. They’re helping cover most of the cost to pay our judges,” Peel said.

Other local businesses have donated toward the cause.

Peel said that coordinators anticipate participation in most departments will stand at about 75 percent of a typical year.

Earlier this year Michigan’s 4-H program announced they would postpone all of their face-to-face youth events until September 1 due to the current pandemic. Shortly thereafter, the fair board took action to waive the $10 project registration fee and eliminated the requirement that exhibitors be affiliated with 4-H.

Although the shows are happening, the annual 4-H and FFA livestock auction will not.

Some of the exhibitors have been marketing their animals on their own to potential buyers but there are still some available. Of those available, all have secured processing appointments, Peel said.

Anyone interested in purchasing a market animal from a Lapeer County exhibitor can contact Michelle Peel at 810-614-0427.